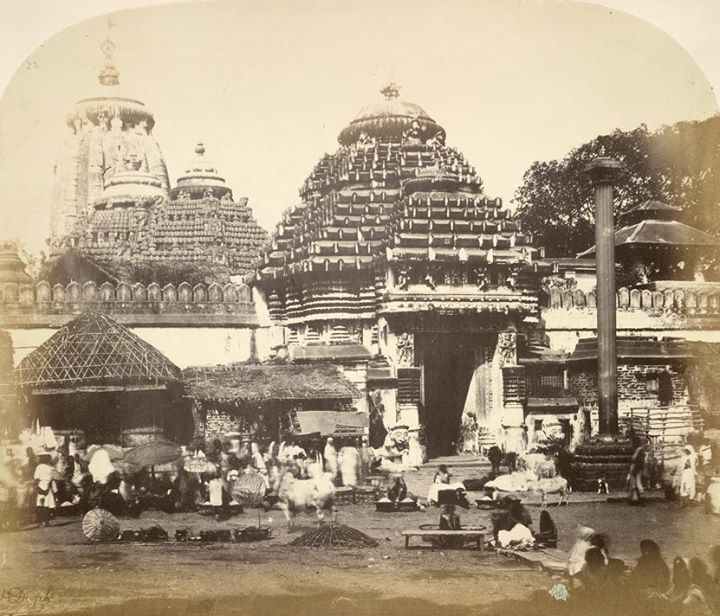 Entrance to the Jagannatha Temple, Puri - 1865

Photograph of the Lion Gateway (Singhadwara) of the Jagannatha Temple at Puri from the Archaeological Survey of India Collections: India Office Series (volume 21, 'a' numbers), taken by Henry Dixon in the early 1860s. Puri, a town on the east coast of India in the state of Orissa, is one of the four traditional pilgrimage centres or 'dhams' for Hindus, and the centre of the cult of Jagannatha, a form of Krishna. The temple that enshrines the wooden image of this god dates from about the mid-12th century, although there were structures at this site prior to this. The main shrine, with its immense deul or sanctuary tower rising up to about 57 metres, and a jagamohana or assembly hall, is attributed to Anantavarman Chodaganga of the Ganga dynasty (reigned 1077-1147). There are two other main buildings, the nata-mandir or pillared hall for music and dance, and the bhogamandir or hall for the offerings, which date from the 15th-16th centuries. The rectangular complex has many other minor shrines and is within a high double-walled enclosure with four gates at the cardinal points. The elaborate Lion Gate or Singhadwara, with its pyramidal tiered roof, is at the east is the main gate. The column in front of it originally stood at the Sun Temple in Konarak.

Thanks for providing such an informative & rare document .

Happy to see such a photo