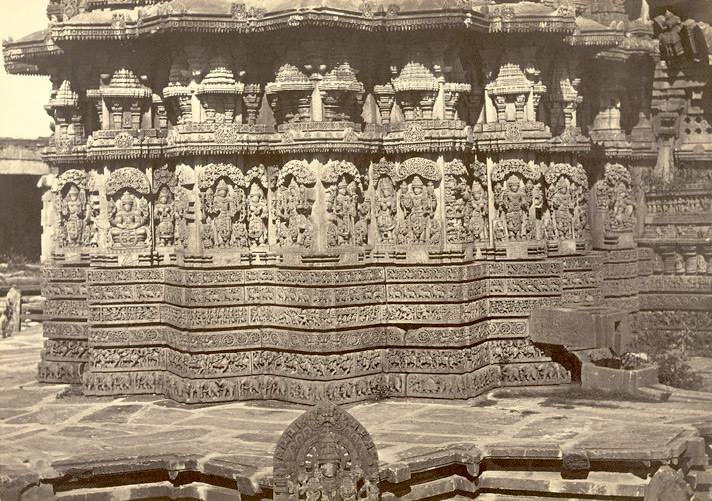 Photograph of a detail of carved friezes at base of the Keshava Temple shrine at Somnathpur, taken by an unknown photographer in the 1860s from the 'Photograph album of Major General Jackson Muspratt Muspratt-Williams'. The Keshava Temple was erected in 1268 by Somanatha, a Hoysala general of Narasimha III. The Hoysala was a very powerful dynasty that ruled in South India from the 11th to the 14th centuries. They were prolific temples builders and their main centres were Halebid, their capital, Belur and Somnathpur. The Keshava Temple is dedicated to Keshava, the god Vishnu under his three aspects. It consists of three shrines approached through a pillared mandapa or hall. The shrines are built on a star, almost circular plan and are situated in the middle of a courtyard. On the outer walls of the temple, at the lower levels, there are friezes with elephants, horses, makaras (mythical sea-creatures), geese and foliated scrolls, seen in this view. A procession of gods richly encrusted with jewels and ornaments is set in the various projections of the walls created by the stellate plan of the sanctuaries. Above the panels, pilasters support miniature towers and an angled eave with a fringe projects above.

Admin one request. I want u to put Google Location too while posting..