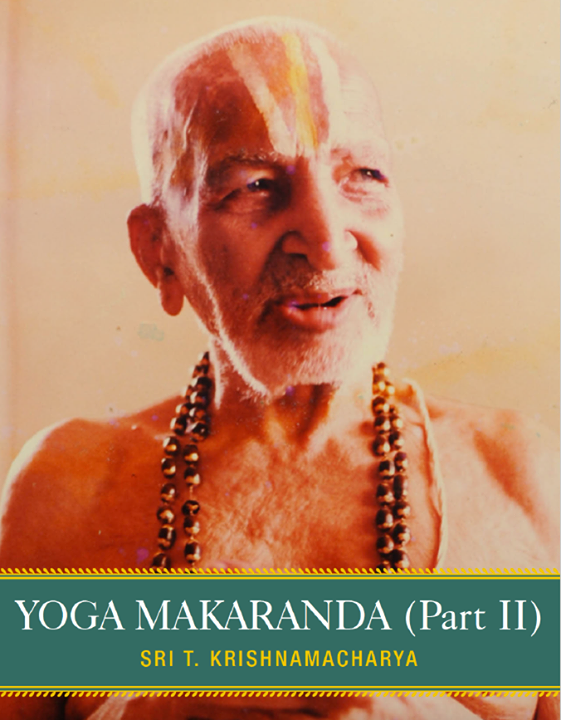 Every epoch goes through myriad changes. Sometimes positive, while at other moments, negative. In conventional Indian thinking, there exists a belief that whenever a dark period dominates, it heralds the time for a shining light to emerge.

The beginning of the twentieth century saw such a light in Yogðcðrya Tirumalai Krishnamacharya. Born at a time when traditional knowledge systems were becoming obsolete, he restored Yoga to its former glory, through his dedication, hard work and creativity. His innovations in the domains of health, healing and spirituality have pioneered the entry of Yoga, once an exclusive practice of the mystics, into every household of our time. A prolific writer, he wrote numerous books and articles on various topics of classical Indian Philosophy.

Yoga Makaranda was Krishnamacharyas first book on the topic of Yoga, published originally in the Kannada language in 1934. This book was one of the very few available at that time, and also the first one to present the practice of ásana-s in a sequential manner (Vinyðsa-krama), a method unknown at that time to the general public. It brought a sense of wonder to the people of that generation, and became the main inspiration for many styles of Yoga, that have sustained to the current day.

This English version, translated by TKV Desikachar, son and long time pupil of Krishnamacharya, opens the doors to international readers to access some of the earliest teachings of Krishnamacharya. It features ninety nine archival images of the master himself, and some of his students at that time, as well as beautifully illustrated sequences of the postures listed. It also includes expository notes, that provide a profound and erudite understanding of the text.

Yoga Makaranda will be a jewel in the personal library of every Yoga practitioner, and an invaluable asset to researchers interested in a more accurate understanding of a vital aspect of Krishnamacharyas teaching.

Source: Krishnamacharya.net is brought to you by Svastha Yoga & Ayurveda.

Do u have this in kannada?

Is there a part one?