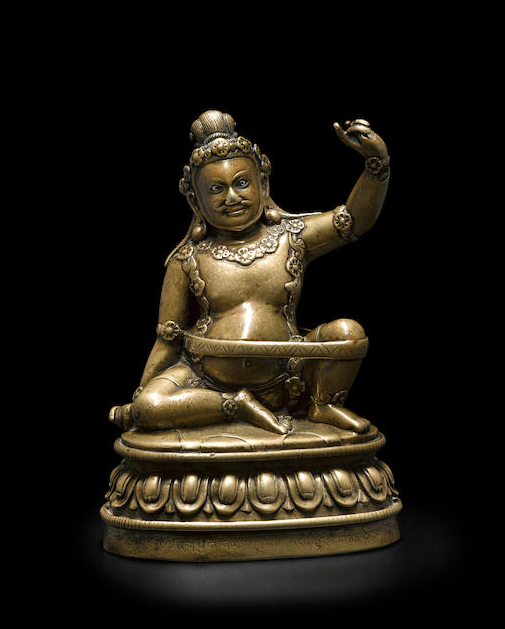 The inscription along the the foot of the base translated:

"With a body blue in color,
The right hand pressed to the ground,
The left upraised in a threatening gesture, seated in the sattva posture;
To the One reversing the Ganga, I bow! Mangalam."

Virupa, the Lord of Yoga, is venerated foremost in magical attainments among the 84 mahasiddhas of India. He is pivotal within all traditions of Tibetan Buddhism. In the Sakya, Virupa is typically depicted in one or all of the six prescirbed forms that follow the major events in his life story. The Sakya iconographic convention for depicting Virupa is to have the right hand raised for depicting the narrative of stopping the sun in the sky. Seen here, the left hand is raised for the narrative of stopping the Ganges river.

The remaining fine details, such as his superbly articulated topknot, indicate the high level of craftsmanship afforded this small, but remarkable sculpture. It is a portrait bronze of consummate charisma. The sumptuous, buttery patina suggests this was a highly treasured personal image of devotion. With its raised details rubbed smooth by prolonged ritual handling and ablutions, the bronze's sculptural beauty is enhanced by the imprint of those that venerated it for generations.

Thanks for sharing this post on the great mahāsiddha Virūpa. It is very important that modern day Indians, especially the ones who follow this page, get a chance to connect to the glorious Indian Vajrayāna tradition, which is still extremely well preserved in the Himalayan regions but lost in other parts of the country besides the Tibetan resettlements in Himachal Pradesh and south India. Here you can read more about Virūpa's hagiography from Keith Dowman's English translation of the lives of the 84 mahāsiddhas. http://keithdowman.net/books/legends-of-the-mahasiddhas.html#virupa