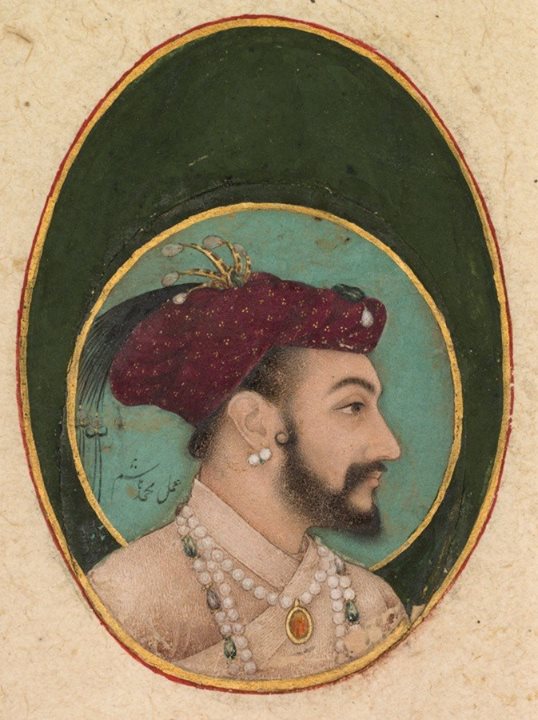 Digital Rare Book:
ULFAZ UDWIYEH, or the materia medica, in the Arabic, Persian, and Hindevy languages
By Noureddeen Mohammad Abdullah Shirazy (active 1625-1640)
Physician to Emperor Shah Jahan
With an English translation by Francis Gladwin
Printed at The Chronicle Press, Calcutta - 1793

He is best known for his large synopsis of 'Yunani' (Greco-Roman medicine as inherited by Islam) and Hindu medicine that was entitled Zakhira-i Dara-Shukuhi and dedicated to the Mughal emperor Shah Jahan's son Dara Shikuh, who ruled as emperor from 1657-9CE.

He also composed in 1628 CE a Persian pharmacological dictionary titled Alfaz al-adwiyah which he had dedicated to Shah Jahan himself, of which the National Library of Medicine has a copy.
-Wiki

This sensitive portrait jewel was probably painted shortly after Shah Jahan came to the throne of the powerful Mughal Empire in 1628 after the death of his father, Jahangir. He decided to wear a full beard, in reference to his increased orthodoxy in comparison to his more liberal father and grandfather. The artist’s signature appears behind Shah Jahan’s nape.

Image and text credit:
The Cleveland Museum of art

amazing perfection, you can see every detail , whether it's beard or shahjahan's eyes

I must admit some of the Urani Medicines work wonders

So Yunani medicine is graeco-roman not Islamic .