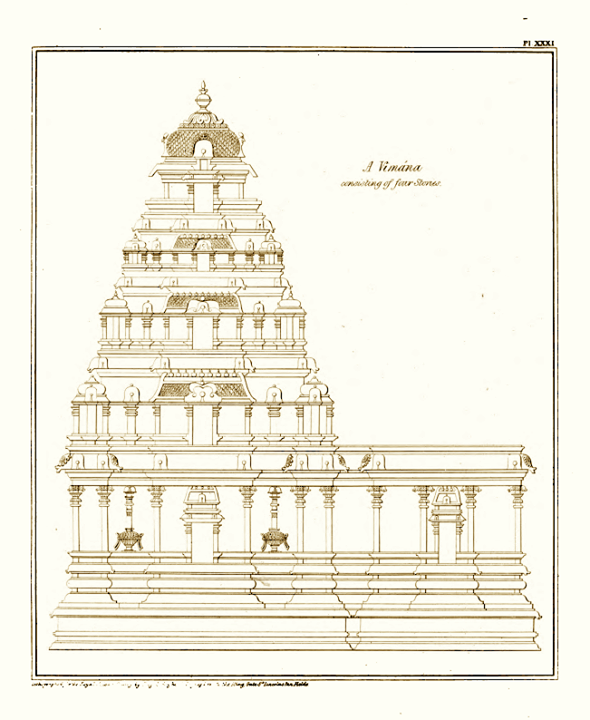 AN ARCHITECT AND A TRUE NATIONALIST

Indian civilisation is indeed a great one on account of the magnificence, range and the variety of its architectural legacy. There were great technical treatises in Sanskrit called the Shilpa Shastras which laid down the ground rules to be followed in the fields of architecture and sculpture.

The first scholarly and critical account of the traditional Shastras was undertaken by an Indian author Ram Raz, who published in English an 'Essay on the Architecture of the Hindus' in 1834. Before him, an English Painter called William Hodges attempted to present a theoretical approach to Indian architecture in general. Hodges visited Madras and toured parts of Northern India between 1780 and 1783.

He published his reflections on the country's architecture partly in the notes accompanying his series of aquatints, 'Select Views in India' (1785-88) and then more coherently in his 'Dissertation on the Prototypes of Architecture: Hindu, Moorish and Gothic of 1787'. This material was repeated and amplified in his volume of memoirs, 'Travels in India' of 1793. In all his works, Hodges clearly perceived that Indian architecture had its own conventions, which were quite unknown to Europe. What his work lacked entirely was any reference to the Shilpa Shastras, the traditional and time-honoured texts in which the local conventions relating to architecture were clearly explained.

Ram Raz on the other hand worked with different materials. Unlike William Hodges, he was not a traveller, collecting data in the field, but an able linguist and he collated traditional Sanskrit texts. In the early 19th Century, scholars knew of the existence of ancient Sanskrit treatises concerning architecture, generally known as Shilpa Shastras ; but no one had attempted any orderly study of them.

It was supposed that a careful scrutiny of these texts would bring out the mysteries of Indian architecture's varied forms, providing a correct account and accurate elucidation of Hindu art. Richard Clarke, a member of the Royal Asiatic Society, proposed that such work should be undertaken and that a translation should be published to make the contents of the traditional Shilpa Shastras accessible to English readers. Ram Raz was the man who was persuaded to take on this task.

Ram Raz was born in Tanjore in 1790. He proudly traced his lineage to the kings of the great Vijaya Nagar Empire. His family was, however, very poor. We know very little of his schooling. He seems to have acquired some knowledge of English somewhere along the way as he grew up. He was completely a self-taught and self-made man. He started his career as a clerk to the adjutant in one of the native Army Regiments of the infantry in the Carnatic.

Later, he was promoted to the position of Vakil to the Second Battalion of the XVI Regiment of the Madras Native Infantry. During these years, he seems to have polished his linguistic abilities in English and several South Indian languages. This made him a skilled interpreter. In 1815, during his tenure as a clerk in the office of the Military Auditor General, he decided to translate into English a Code of Regulations drawn up on the orders of Tippu Sultan for the guidance of his Revenue Officers.

Ram Raz's translation was so accurate and so complete that many Englishmen were reluctant to believe that such a work could have been done single-handedly by a Hindu. That was how Ram Raz attracted the attention of Richard Clarke who was then a high official in the Government of Madras and also a senior member of the College of Fort St George in Madras. It was Clarke who was responsible for the appointment of Ram Raz as administrative head of the College office.

Thereafter Ram Raz became head English master in the college. During this time he came into touch with Captain Harkins. While working in the College of Fort St George, Ram Raz pursued his study of Sanskrit, mathematics, geography and astronomy, apart from conducting classes in these subjects. On account of his scholarship, he became a member of the Royal Asiatic Society. Harkins recommended Ram Raz to the first Commissioner in Mysore for a high appointment, consistent with his genius and abilities. Ram Raz ultimately became a senior judge and Magistrate at Bangalore. He died in 1830.

Right from 1812, Ram Raz collected ancient architectural treatises in Sanskrit and worked hard to decipher their mysteries. The result was 'The Essay on the Architecture of the Hindus', posthumously published in London in 1834. Captain Harkins wrote a preface to this pioneering work on Hindu Architecture by Ram Raz. In this preface, he said: 'The introduction to the European Public of an 'Essay on Hindu Architecture and by a Hindu, would seem to mark an epoch not only in the history of science but also in that of the Hindus themselves'. This book included Forty-eight fine drawings on Hindu architecture.

The sources Ram Raz used for his work included a number of traditional texts, the manuscripts of which he had assiduously acquired and collected. Many of the manuscripts were mutilated and fragmentary. The most comprehensive and complete source he used was a treatise called Manasara. Ram Raz declared with confidence that this treatise was composed in South India and all the existing temples in South India corresponded to the principles laid down in Manasara.

What is amazing about Ram Raz's essay is that he presented a careful analysis of the principles of architecture as laid down in the Shilpa Shastras with reference to the available evidence of extant South Indian temples and showed that these temples in every possible way gave a cubic content to the fundamental axioms of architecture laid down in these traditional treatises.

According to him, there was a complete poetic fusion of theory and practice in the field of Hindu architecture. He also compared the architectural features of the South Indian temples with the styles of architecture to be found elsewhere in the world, in Greece, Rome and Egypt.

Ram Raz made another brilliant observation in his 'Essay'. He complained that only a few Brahmins could assist him in interpreting the Shilpa Shastras but they had no idea what so ever of architecture. The active rural craftsmen he approached were ignorant of Sanskrit and were unable to read the texts, their extensive practical knowledge having been learnt through pupillary succession. There seemed to be no interdependence between theoretical treatise and practical process.

Ram Raz clearly observed that it was not possible to give an exact chronology of the architectural samples from South India. At the same time, he was unwilling to accept the assumption of all Western scholars that Hindu architecture was indebted to Western inspiration. In his 'Essay', he indicated his cautious and methodical approach with conviction and humility: 'Some of the Western authors have traced a certain resemblance in the leading features of the buildings in Egypt and India and have thence concluded that there has very early been a communication of architectural knowledge between the two countries. But it is not altogether improbable that this resemblance may be merely owing to accident; in as much as in architecture as well as in any other art , indispensably necessary to the comfort of mankind, two or more nations may possess something in common, without having any intercourse with each other, for the wants felt by man being the same, it is not surprising that the remedies resorted to for supplying them should be similar or nearly so.

If, on the other hand, however, both these countries had actually any communication in early ages, it is hard to determine which of them may have been indebted to the other. The Western writers have not placed this matter beyond a doubt. And for my own part, I will not venture to form an opinion as to this alleged affinity in the architecture of Egypt and India. I humbly presume, therefore, that until the Shilpa Shastras of the Hindus is correctly illustrated and laid before the public, the question as to whether the Hindu art owes its origin to the one or the other of the two countries must remain problematic'.

Though living in colonial times, Ram Raz did not allow his mind to be colonised by the English Scholars like William Jones, H H Wilson and others. Ram Raz refused to assume or accept a Western origin for Indian architecture.

He also boldly declared that the Western authors had failed to understand or appreciate the aesthetic beauty of Indian Temple architecture. His 'Essay' o

"Though living in Colonial times, Ram Raz did not allow his mind to be colonised by English scholars... Ram Raz refused to assume or accept a Western origin for Indian architecture". Can't say the same for the present lot, can we?

Gopuram and sanctum sanctorum in south indian Temples and its towering roof are known as 'Vimana'.

Fascinating. Especially the commonalities between India and Egypt. Perhaps travellers, like bees disseminated these ideas?

Truly a self-made man with a deep scholarly interest.

Jay Corvan In case this is of interest to you.