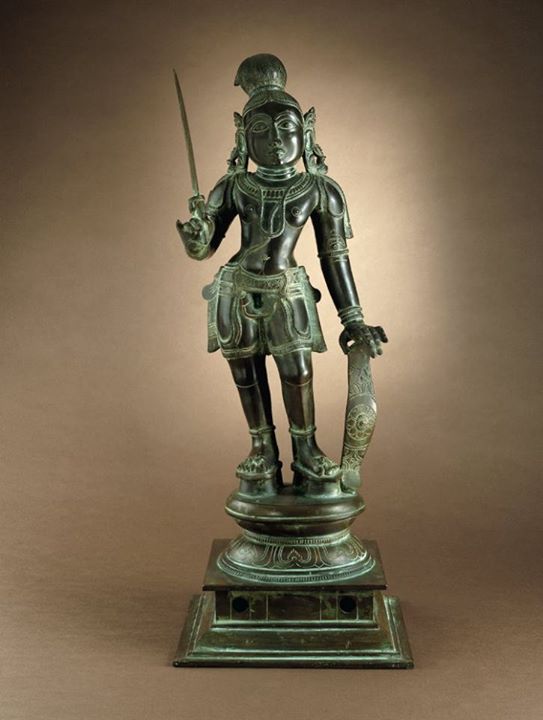 Image:
Tirmankaiyawar holding a sword in the right hand and a shield in the left

Holding a sword in the right hand and a shield in the left; cast in a copper alloy and incised.

Devotionalism is today a very strong element in Hinduism and its roots can be traced back to the sixth and seventh centuries AD. In south India at this time itinerant devotees travelled from shrine to shrine singing the praises of the god and abandoning themselves to his worship. These hymns of adoration have been collected together and form a large literature of devotional poetry. Further, the inspired saints who gave their lives to the worship of the deity through their compositions and recitations, have themselves become the objects of veneration and love. This devotional element in Hinduism, for many centuries now pan-Indian, is known by the Sanskrit word, 'bhakti'.

The South Indian singer-saints who praised the name of Vishnu are known as the 'alvars'; the Shaiva equivalent are the 'nayanmars'.

Tirumangai, probably active in the late 8th century AD, was renowned initially as a 'dacoit' - hence the sword and shield he carried - but later renounced this life in favour of one of devotion to Vishnu, whose name he praised in a prolific outpouring of devotional poetry.

Image and text credit:
Â© The Trustees of the British Museum

Thirumangai Mannar built srirengam temple. He is always with vaal

The book title and the description given below doesn't seem to match. Am I missing something here?