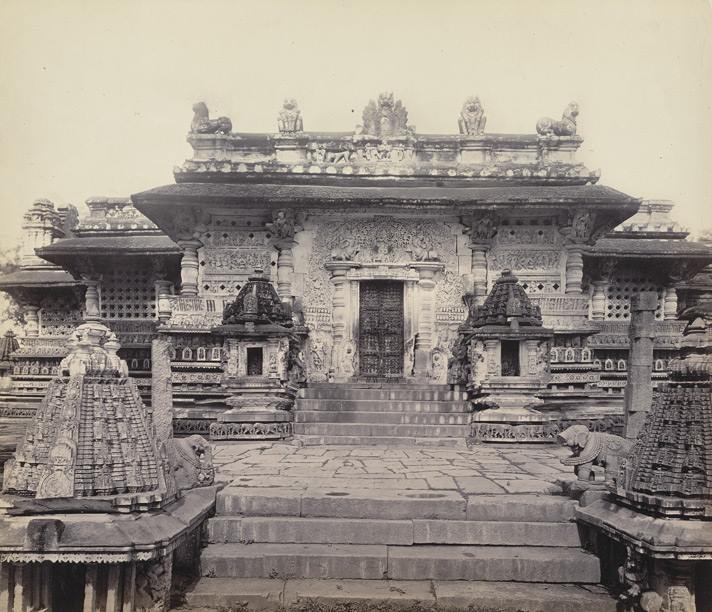 East Entrance of the Chennakeshava temple at Belur - 1895

Photograph from an album of 40 albumen prints by Edmund David Lyon.View looking towards the mandapa (hall) of the Chennakeshava temple at Belur in Karnataka, showing the elaborate carving on the enclosing walls. The temple, dedicated to Krishna as Chennakeshava or the Beautiful Longhaired One, was built in 1117 AD by the Hoysala king Vishnuvardhana apparently to mark his

independence from the Chalukyas of whom he had been a vassal, and to commemorate his victory at Talakad over the powerful Cholas. Belur was the early capital of the Hoysalas in the 11th and 12th centuries. They shifted subsequently to Halebid. They evolved an unique style of architecture, of which the temple at Belur is an impressive example, built on a star-shaped plan and embellished with sculpture. It stands within a walled courtyard, and is surrounded by smaller shrines and columned mandapas. Mysteriously, it lacks a tower over the sanctuary, appearing flat-roofed. In his 'Notes to Accompany a Series of Photographs Prepared to Illustrate the Ancient Architecture of Southern India' (Marion & Co., London, 1870), edited by James Fergusson, Lyon wrote, 'The temple is built on a platform raised about three feet from the ground. It has three entrances, the one on the east side being here shown. There are two others, one on the south, and another on the north side. That shown in this Photograph is the principal one, as it faces the sanctuary.'

Pa Vinu Have a look, if you are interested.