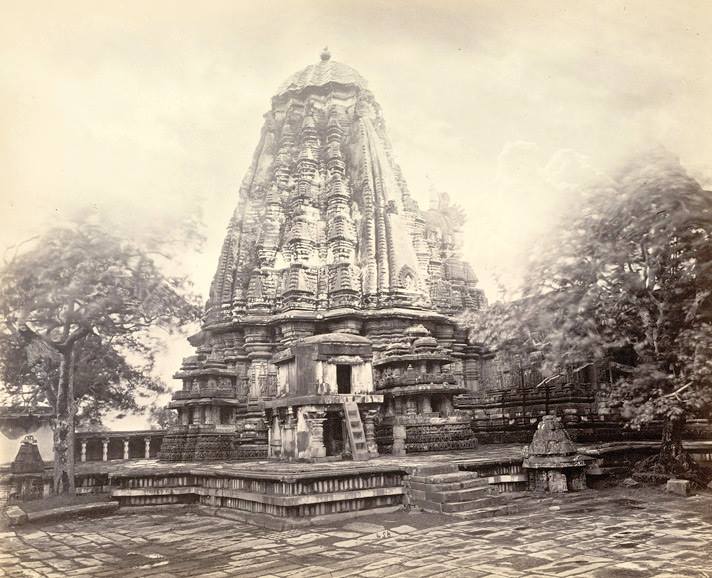 Image:
Photograph from an album of 40 albumen prints by Edmund David Lyon. Belur, a small town on the banks of the Yagachi in the Hassan district of Karnataka, was the capital of the Hoysalas in the 11th and 12th centuries, before they shifted to Halebid. The Chennakeshava temple at Belur is considered one of the finest examples of early Hoysala architecture. It was built in 1117 AD by King Vishnuvardhana to mark his independence from the Chalukyas of whom he was a feudatory, and his defeat of the powerful Cholas at Talakad. This is a general view of the central shrine in the courtyard of the temple. Lyon's 'Notes to Accompany a Series of Photographs Prepared to Illustrate the Ancient Architecture of Southern India' (Marion & Co., London, 1870), edited by James Fergusson, gives the following description: 'From this Photograph, it will be observed that the architecture of the temple is in a totally different style from any of those previously described. The tower is no longer square in plan, and divided horizontally into storeys by ranges of cells, or what were originally intended as such, but is divided vertically into four compartments, by great flat bands, between each of which nestle fifteen repetitions of itself, five on the top of each other, in three rows. The dome on the top is a modern repair, but its original form can easily be restored from the numerous models of it shown in the following Photographs. The style of its architecture is one with which we are perfectly familiar, as existing in the north, and especially the north-west of India, and its being found here is sufficient to prove the existence, at the time of its erection, of a colony of some northern race among the Dravidians, to whom all the preceding examples belong. Fortunately its date is perfectly well known. It was commenced in 1114, by Vishnu Verdanna Bellala, to mark his conversion to the Vishnave faith from that of Jaina, to which he and all his forefathers had belonged since 984, when their name first appears in history'.

Even in 1911 when this book was published it had the Vimala. Must have collapsed later. The Archaeology Department should publish it again

This is Belur temple

This is one more pic of Belur temple.

Wow! When this was published the Vimala was still in there

There was a superstructure