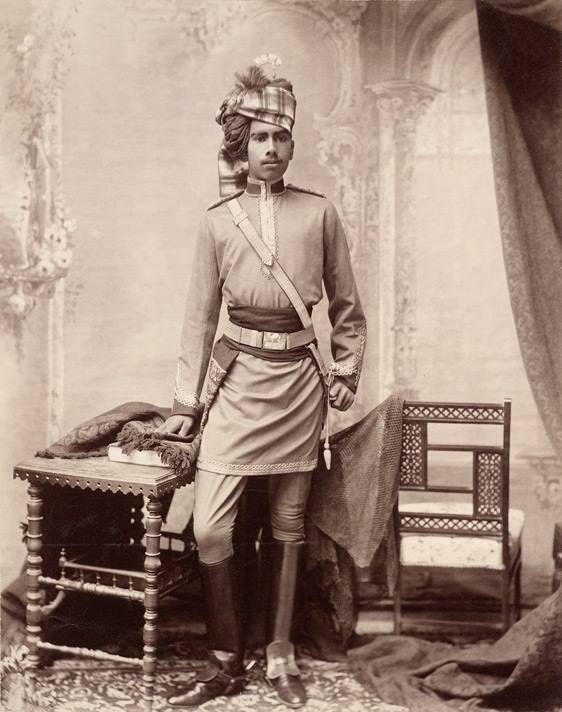 Digital Rare Book:
His Highness The Maharaja Of Bikaner - A Biography
By K.M. Panikkar
Published by Oxford University Press, London - 1937

General Maharaja Sir Ganga Singh, GCSI, GCIE, GCVO, GBE, KCB, GCStJ (3 October 1880, Bikaner – 2 February 1943, Bombay), was the ruling Maharaja of the princely state of Bikaner (in present-day Rajasthan, India) from 1888 to 1943. He is widely remembered as a modern reformist visionary, and he was also one of the two "non-White" members of the British Imperial War Cabinet during World War I.
-Wiki

Image:
Photograph of Sir Ganga Singh, the Maharaja of Bikaner in Rajasthan, from the Elgin Collection, taken by an unknown photographer during the Viceroy Lord Elgin's 'Autumn Tour 1896'. Ganga Singh (1887-1943) was known for his enlightened views on modernisation. He instigated an extensive building programme in the city, including the Lalgarh Palace and the Ganga Niwas. He was also the founder of the Bikaner Camel Corps, now part of the Indian Army's Border Security Force, which served in China, Somaliland, Egypt and the Middle East as part of the British Army in India.

RE : " ... he was also the only "non-White" member of the British Imperial War Cabinet during World War I." I'm not sure that this little nugget of information, as above, is entirely accurate. Please see the image provided below -- it shows the Imperial War Cabinet at Downing Street in April 1917. Second row, first left : Sir S.P. (later Lord) Sinha Second row, second left : H.H. Maharaja of Bikaner. https://en.wikipedia.org/wiki/Imperial_War_Cabinet#/media/File:Imperial_War_Cabinet_in_1917.jpg

A great King,Administrator and Philanthropist. He brought Bikaner on the World map by bringing water to a dry area and water is lifeline for mankind.

My personal feeling is that Sir Ganga singhji was one of the greatest ruler, military commander, soldier and a statesman. Biased and castist Indian historians haven't given him his due.

His Highness Sir Ganga Singh ji Bahadur of Bikaner, Such a great Maharaja...

Shri Ganganagar is on his name.

what a young proud man.