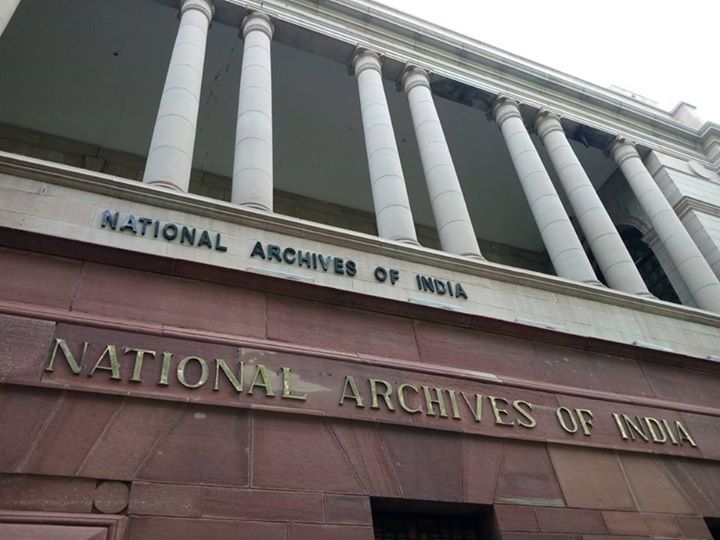 Article:
How the National Archives of India Is Actually Destroying History
By Choodie Shivaram
Published in thewire.in on 24 May 2017

History is jeopardised as priceless documents are ill-treated and defaced on a regular basis by both staff and scholars.

Something is rotten about the state of the National Archives of India. The heritage Lutyens building houses priceless historical documents, “stored in over 40 km of shelf space”, according to Sanjay Garg, deputy director of the archives. These include documents dating back to 1748, a rich collection of private papers, over 7,500 microfilm rolls and records from several countries. Scholars, academics, authors, journalists and students frequent the repository. Outstanding works by renowned authors and researchers have emanated from this goldmine.

One would think that the guardians of the National Archives would make it their bounden duty to protect and preserve our nation’s written history. However, the horror story begins here.

Thanks to callous mishandling by staff and scholars alike, priceless documents have ended up dog-eared and annotated. Staff at the research room mandate scholars to number all the pages of a document selected for photocopying. Some scholars highlight portions important to them using coloured pens ­­– on original documents. Fragile and aged archival pages are flipped through several times by each scholar; while photocopying, these are disengaged from the file, only to be put back in a haphazard manner. As a result, documents end up with multiple page markings, at times right in the middle of a priceless document. This defacement happens every day, on treasure that belongs to the next generation.

“It’s the first I’m hearing of this, it’s shocking, this is blasphemous,” says Garg, when this writer informed him of this practice. Public Records Rules 1997 section 11 (8) mandate that it is an offence to “write, put any marks or indications on public records, and to take any eatable or drinking products while consulting public records.” I recently saw a staffer eating an orange as she sat looking over the documents on her table. A 1947 document on Travancore has a completely tattered page whose pieces are bunched together and tucked inside the file.

William Dalrymple writes in his book White Moguls, “In Delhi in the vaults of the Indian National Archives, someone installing a new air conditioning system had absentmindedly left out in the open all six hundred volumes of the Hyderabad Residency Records. It was monsoon. By the time I came back for a second look at the records the following year, most were irretrievably wrecked, and those that were not waterlogged were covered with thick green mould. After a couple of days a decision was taken that the mould was dangerous and all the six hundred volumes were sent off ‘for fumigation’. I never saw them again”.

A JNU professor was horrified when he was told that the files he was seeking had been sent for drying since they had become damp owing to waterlogging.

The National Archives is truly archaic. Every single process here, from the requisitioning of documents to seeking copies, involves tedious paperwork – in multiples. In the era of ‘Digital India’, the NAI is surely not in contention for the prime minister’s award for going paperless.

For a while i was shocked by reading this artical.When National archives of India itself not in a position to preserve the ancient records properly ,then who has to do this work?It is my request to the Governament,please appoint the person who has respect and love towerds our history and heritage and thereby protect our nations valuable written records for the benefit of our future generation .

It is a plain irony of Indians who boast of "greatness" of Indian heritage and leave no stone unturned to shout from their roof tops;in reality they have no sense and pride of preservation!!!They are not even proud of their history...a great example of double standards!...one can see their apathy when you visit incomparable monuments,the state of their preservation,carelessness leading to vandalization....less said the better...

A detailed proposal was formulated for conservation of the building, restoration of all old documents and re design with right lumen and temperature setting required for ensuring longevity of all the archival data. All the hardwork just remained in the paper report format. Even after repetitive reminders no action was taken

V r busy learning our history from foreign writers. We have lost our sentivity, guys. We are psychological/ mental slaves, this is the reality. We do not respect anything except ourselves. No country pride, no self respect just well trained slaves of 21st Century. SUPER CLERKS

Most hilarious, last month when I visited the archives, they allowed me to go through the file index. But said, I was not allowed to note down file numbers as I was not registered there. Theatre of the absurd! (By the way, every file number is avaliable on abhilekh patal.com) :D

sadly, they tend to appoint very political bureaucrats as the directors and only rarely are historians or professional archivists placed in positions of power or given the necessary budget -- add to this the fact that so many records are still held by ministries like the Ministry of Defence or Home Ministry where they are heavily weeded, often with a political agenda

It is indeed sad to read such reports for a nation that has an ancient history and heritage. Why then do we lament the fact that many were stolen or taken away to the West? Also even if the right person having knowledge and sympathy and love for such wealth is appointed the people who report to him will just not pay heed because they are so steeped in their ways that they will make sure the person is removed/leaves the post just so that they don't have to change their ways...sad indeed....Besides it is believed that only Bureaucrats are capable of handling such tasks...

The National Archives of India is a horrible place. I have been here five times in the past 15 years, but found it open only once. At that time, the original Baburnama and a few other similar interesting documents were on display as mere exhibits, sans any discourse on their overall importance nor with the security one might expect. In comparison, the Mayo College Museum is far ahead. A pity that there is zero accountability for this. Fortunately, the Instruments of Accessions are not kept here.

The staff at the National Archives is absolutely terrible. Years ago when I first made a visit there to check up on some documents pertaining to modern Indian history, the illiterate staffers mistreated me and asked uncomfortable questions about my "reasons" to study those documents. Needless to say they mislead me and sent me to the block where only economic records were kept. I decided not to step in there again after that.

Kindly noted.. Its not only this archives... in some state archives too, the attitude of the staff is arrogant.. Behaving like they own the building and the documents. Change rules for their convenience, bad manner of speaking, no sense nor understanding about their job, and so on and so on. This happen because they are not trained professionals... Appointed on the basis of cash not merit.. They have no love for history. And the saddest part is that they are aware that they are wrong.. But acting as if everything is right.. Wake up India...

I was a regular visitor to the Archives in the 1990s for my research. Things were much better off then. I wonder what kind of scholars can actually deface original documents in this way.

Also, it takes three to six months to photocopy each file! You HAVE to pay by demand draft and courier it. Also, the file will be photocopied and couriered to you house 3-6 months later!!

Please appoint eligible candidates on the basis of merit and knowledge and sensitivity along with common sense. The same thing thing is happening in ASI ( Archaeological Survey of India). People selected on basis on reservation will jeopardise our Rich Heritage

They even destroyed or hid the evidence regarding netaji chandra bose's death.. describing nehruji's hidden investigation about netaji's death...inspite filing pil they still didn't handed over even half of the papers.

Very sad and unfortunate..!! It's about time we learn some culture, discipline and decency. This is not only immoral. ...but surely near to criminality. .!! Shame on us!!!!

Shocking....also read the CAG report on ASI and National Libraries....it is criminal...transfer out the staff ....lock stock and barrel only then any reprieve is possible...but who has the vision????

It may take lot of efforts and time . But the authorities should consider scanning each and evey documents and preserving them in computer files . They should offer scanned computer files documents to all the research scholars and historians . In this way there would be less manhandlings and more preservations of the valuable and priceless historical documents . :)

Most interesting place for people who are interested in the History of our proud country India . The records hold most interesting facts regarding death tragedy of Subhash Chandra Bose and many more facts.

It pains me to know about such extreme amount of callousness on the part of staff & the people using the precious documents. I have a few sugetions to check this menace:- 1. All users should be registered as members in two or three categories (a) scholars & authors(b)researchers (c)others. They should all be made to deposit a SECURITY DEPOSIT,ranging from Rs 1lac to 10,000 depending upon their category. 2.eyery table should be under the eyes of a CC TV camera , all of them to be connected to a control room,where a team of staff should be keeping a constant watch.The moment they find somebody harming a document,he/she should be caught red handed & his/her membership be cancelled after imposin an appropriate fine ,to be adjusted with the security deposited. 3.No body should be allowed to take any document home. 4.Photostat & photography facility should be available & a competent staff should do the job for student on payment on the spot.

The present generation of people and their wards are leading a life of isolation. The arrival of internet robbed away their natural instinct to learn about their past. Hence the archives gets ruined in the long run.

Lots of people want to do something for the Country but due to corrupt, arrogant, illiterate politicians; They remain in their own little World.

It's v sad.. I have visited here too and found it so v Poorly managed. I hope some good sense prevails ... if we preserve , we conserve ... else we also perish too fast!

Indians are never born to respect knowledge... they can only fight between themselves, Hindus Muslims brahamins dalits kuttas chutiyas politicians etc etc etc

Indeed sad how these priceless documents are been treated. No value of our precious ancient history. Wondering if they could transfer the responsibility of restoration to some other foreign country, a good solution... I guess.