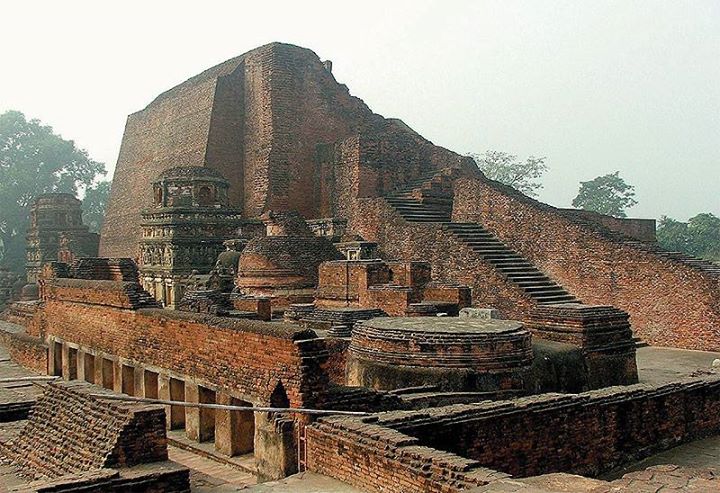 In her book, The Educational Heritage of Ancient India, Sahana Singh shakes the dust off India’s glorious but forgotten past in a revealing discourse. To begin with, the book’s cover with its vibrant illustration of an acharya teaching his shishyas silhouetted against the sun’s early morning rays is evocative of India’s intellectual awakening to a time before time. Such a time in the country’s past that had a robust, structured and institutionalized education system was during the Vedic Ages. India was in fact a pioneer in applied and pure sciences, long before they were conceived in the Arab world (let alone Europe). Singh’s book takes the reader through a vivid journey of pedagogy in time. There were forest universities – not mere mythological episodes – but holistic centres of learning in the fields of literature, art, the Vedas, grammar, metrics, law, logic and solid geometry. These were followed by well-entrenched urban universities, which had exacting standards for clearing entrance exams and graduating. Each university competed with the other to carve a niche for itself in specific fields of study. Acharyas or teachers from many of these universities had produced treatises on medicine, polity, economy, quadratic equations, trigonometry, arithmetic progression, differential calculus and many more.

One of the takeaways for me from this book’s earlier chapters was that education meant practical demonstration of learning and not mere regurgitation or rote. It breaks the stereotype that ancient Indian system of learning was synonymous with mechanical chanting of the scriptures alone. Knowledge was in fact applied to the building of tangible artefacts such as irrigation canals, rainwater harvesting and town planning. Similarly, ancient medicine was not only about local knowledge systems dealing with herbs, emollient, mind-healing or diet. It included diagnoses of ailments, skin grafting, surgery and many more. These were things that existed, were experienced by our ancestors and were the outputs of educational rigour. Perhaps it is time for us to revisit our mythologies and epics to sift through stories and recognize historical facts as Singh has done. Let us not be lulled by current mainstream media and scholarship, into believing that most of it was either a transient, mythological event or intervention by a divine entity.

Many of the ancient Indian scholars predated their western counterparts from Eratosthenes to Newton by several centuries. In this regard, the book reveals the critical role played by India as a knowledge hub for countries across the globe through the medium of trade. Singh treats trade relations as not sheer transfer of goods, but also of knowledge. Movement of commerce coincided with the advent of literary ambassadors from China and Persia. They were the vehicles for transporting learning from India to China, the Arab world and eventually to Europe. The book also contains historical evidence to prove that Jesuit missionaries took back mathematical treaties from Kerala to Europe. This historical event also coincided with Europe’s awakening to the renaissance. Singh thus debunks the common narrative of cultural servitude, ironically endorsed by our present day school textbooks. A humble acceptance of the debt we owe to the West for bequeathing to us the spirit of scientific inquiry and reason has become ingrained in our psyche. Singh’s book reminds us of those forgotten moments in history that tracks down western philosophy and scientific revolution back to their genesis in Indian soil.

If the reader feels sanguine about the intellectual achievements of our ancestors through the first half of the book, the second half offers a striking contrast. The latter part of the book sets the tone to one of introspection at the poignant historical events that were played out. Singh leverages the change in tone to juxtapose a positive development (i.e. knowledge dissemination) to contrast it with the deep blow dealt to the creative genius of the original scholars, through plagiarism and absence of intellectual property rights. Further, the maniacal massacre led by Bakhtiyar Khilji in several universities of North India, silenced forever some of the brightest minds in the land.

India’s treasure trove of knowledge and learning was lost forever and Alexandria with its suspect literary sources became the world’s knowledge repository. Subsequently, she critiques through documentary evidence pieced together from royal biographies, the uninformed and reactionary measures, which Muslim rulers undertook to undermine classical education systems. It was followed up by the British, who systematically destroyed the last vestiges of our grand, intellectual empire. In this, she lends voice and builds a logical narrative to Sitaram Goel’s works that described the destruction of Hindu temples and centres of learning, due to Islamic conquests and missionary zeal.

@ Harpreet, may I know the corelation between a foreign invasion and crumbling conditions in a society? Can invasions not happen in order to usurp the riches of a wealthy kingdom or to take advantage of a peaceful reign? Interesting to see this assertion that Nalanda university was dying anyway and Khilji only hastened it. Which means all those scholars and teachers who were killed and the valuable manuscripts in libraries that were burned don't mean anything. Why this justification? Vikramshila which had emerged as a competitor of Nalanda (and was doing better than Nalanda) was burned down too as was Odantapuri. I guess all this did not make any difference to the body of knowledge available to the world? Let me make it simpler. What do you think will be the impact of burning down some of the endowment-starved Ivy League universities such as Cornell, Harvard and Harvard's neighbour MIT (not an Ivy League but facing huge losses in its endowment kitty as well) within weeks of each other? Is it not going to be a huge loss to humanity and to the body of knowledge that it houses? Would it be fine to burn them down and say, "oh that was not such a huge loss, because they were dying anyway"? Killing a whole generation of professors at various universities will have no impact?

The allegation on khilji is not bit more stark than it must have been? Great loss to knowledge would have happened due to foreign invasion. But an invasion is indication of crumbling conditions of a society which exits within that society. The monastery could have been dying due to several other reasons by the time Khilji invaded India, the attack could have proved last nail in the coffin of this place.

People like Harpreet Kaur Jass, still are Mental Slaves to British Propagated Theory..so they will still parrot out lie without using common sense.

I m going to buy it and read it.

SO GOOD TO KNOW MANY THINGS