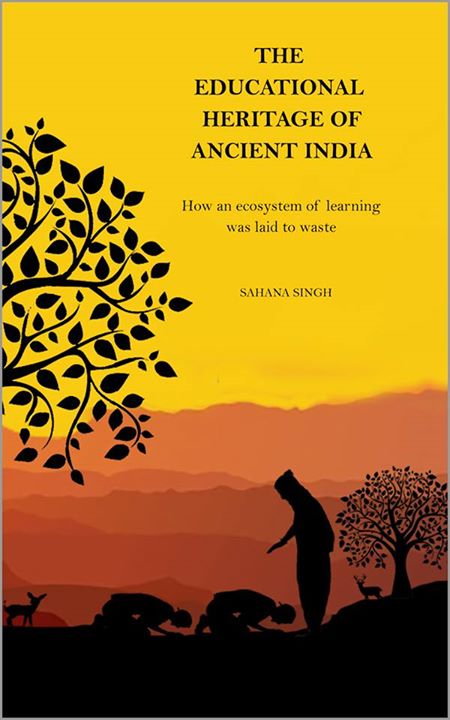 New Book:
The Educational Heritage of Ancient India - How an ecosystem of learning was laid to waste
By Sahana Singh

When Tagore started an open-air school at Shantiniketan in 1901, which later went on to become a famous university, he was one in a long line of educators from India who believed that holistic learning could only be obtained in the midst of nature under the close supervision of a parent-like guru.

India’s earliest teachers were the gurus who taught in gurukulas and ashrams located far away from the hustle and bustle of towns in what could be called forest universities. It is no surprise that the Vedas, which are the earliest known oral books containing the thoughts of a highly civilised society are replete with exquisite references to nature and the concept of inter-dependence of living organisms. To these gurus, it was important for humans to realise their humble status in the infinite universe before embarking on the long journey of learning.

Not all gurukulas were in forests though. Many were in villages and towns, since the gurus were usually householders with families. However, secluded locations were preferred. (1)

Over time, the systems of transmission of learning to newer generations got institutionalised and gave birth to famous universities such as Takshshila, Nalanda and the famous temple universities of which the remains are still found in southern India. A sizeable number of foreign students came to study in India from China, Korea, Japan, Indonesia and West Asia. While the most famous names are Fa-Hien and Xuanzang (Hieun Tsang), who left behind detailed accounts, there are scores of others who made difficult journeys by foot and on board ships just to imbibe knowledge from Indian professors. Many of the foreign students copied texts and commentaries to carry back to their countries. The rush for gaining an education from the Brahmins and Buddhist scholars of India was similar to today’s rush to study in or be certified by American and European universities.

There is a curious hesitation among modern historians to refer to India’s multi-disciplinary centres of traditional learning as universities. This comes from the excessive importance given to the written word, to solid buildings with established pedagogy and rigid systems of certification. Thus, the talented but bare-chested and dhoti-clad engineers and architects of ancient India who built incredible irrigation canals, rainwater harvesting structures, palaces, forts, roads, dams and aqueducts are barely acknowledged as professionals. Similarly the medical practitioners of yore who knew which combination of herbs could help in healing diseases, where to procure them in forests, how to conduct complex surgeries and additionally possessed spiritual insights are often regarded as quacks or witch doctors.

Learning was a sacred, important duty
Ancient Indians were deeply invested in gaining perspectives about “the material and the moral, the physical and the spiritual, the perishable and the permanent” (2). During the process of gaining these perspectives, they made important discoveries in the sciences, mathematics and applied medicine. The sacredness of learning is evident from the large number of Sanskrit shlokas that deify the guru such as “Acharya devobhava” (Taittiriya Upanishad). Initiation of children (both male and female) into the alphabets for the first time was done ceremonially in most parts of India. Even today, the ceremony survives in the Haathekhori in Bengal (performed during Saraswati Puja) and the Vidyarambha in Southern India (when children are asked to trace alphabets on rice). The sacred thread ceremony or the Upanayanam ceremony performed for Dwija children between the ages of eight and 12 customarily marked the beginning of education. Traditionally, it was considered unethical to barter knowledge for money. Gurus usually took a token gift (Guru Dakshina) in return for the long years of knowledge they imparted.
Chinese student Xuanzang has left a touching account of the love of learning in India. It was not forced but came naturally from the seeds of curiosity planted in childhood. He found ascetics who devoted their entire lives to learning and teaching simply for the love of knowledge be it in sciences or philosophy and to the exclusion of every comfort. Such men, who also adhered to high moral standards, were held in high esteem by the State but did not care for any honour bestowed on them. The practise of bhiksha (requesting for food from households which is incorrectly called begging in modern times) was common among these ascetics and was regarded as a perfectly respectable activity. Xuanzang mentions that dedicated scholars preferred poverty to affluence and did not even heed the ties of domestic love. They knew no fatigue and travelled across the country to lecture and share their knowledge. Thus, there was a system that ensured a steady supply of qualified persons who gave themselves up to a life of learning and service to the land while keeping their needs to a minimum. (2)

The forest universities of Ancient India
The Mahabharata gives examples of famous ashramas such as Naimisha, which was a forest university headed by Saunaka. Other hermitages mentioned in the epic are those of Vyasa, Vasishtha and Visvamitra. One hermitage near Kurukshetra even mentions two female rishis. Among Vyasa’s famous disciples were Sumantra, Vaisampayana, Jamini, Paila and Suka. (2)

Rishi Kanva’s hermitage is not mentioned as a solitary unit, but an assemblage of numerous hermitages around the central one presided by Rishi Kanva (2). There were specialists in every branch of learning cultivated in that age; in each of the four Vedas; in Yagna-related literature and art; Kalpa-Sutras; in the Chhanda (Metrics), Sabda (or Vyakarana), and Nirukta. There were also Logicians, knowing the principles of Nyaya, and of Dialectics. Specialists in physical sciences and art also taught their skills. The art of constructing altars of various dimensions and shapes for conducting yagna was regarded as significant and this required the teaching of Solid Geometry. Other topics that were taught included properties of matter (dravyaguna) and physical processes. Zoology was also a subject. (2)

Thus, the forest universities laid out an entire spread of subjects that imparted a holistic view of the world as it was then known. There were no artificial demarcations between religion and science and often, one led to the other.

One of the takeaways for me from this book’s earlier chapters was that education meant practical demonstration of learning and not mere regurgitation or rote. It breaks the stereotype that ancient Indian system of learning was synonymous with mechanical chanting of the scriptures alone. Knowledge was in fact applied to the building of tangible artefacts such as irrigation canals, rainwater harvesting and town planning. Similarly, ancient medicine was not only about local knowledge systems dealing with herbs, emollient, mind-healing or diet. It included diagnoses of ailments, skin grafting, surgery and many more. These were things that existed, were experienced by our ancestors and were the outputs of educational rigour. Perhaps it is time for us to revisit our mythologies and epics to sift through stories and recognize historical facts as Sahana Singh has done. Let us not be lulled by current mainstream media and scholarship, into believing that most of it was either a transient, mythological event or intervention by a divine entity.

Thanks Rare Book Society of India for letting us know about such an informative book !

The issue is not how great education was then. The issue is that what was relevant then is impractical today. The great scientific advances of the last 500 years was ignored by Indians at their peril. We ned a rational scientific temper. It doesnt matter whether its in the forests or cities. We need educational institutes which are free of Bureaucratic deadwood. Thats why everyone who can afford to, goes abroad to Western Universities.

The gap widened as political power changed hands for 1200 years! Though India did gain the foreign knowledge from Moslem & the European rules ! The ancient indigenous knowledge took a back seat!

Bet that there'll be none of the usual liberal hordes on this particular post. :)

most of the great concepts,if not all, have originated from india.

Only kindle format is available now ...make it in paperback also

Everything changes....It clearly did not produce a society or system strong enough to defend it.

A small beginnings have been made by SPACE FOR NURTURING CREATIVITY in Guptakashi,Uttarakhand.

Sir, thank you very much for posting of this book. Where do I get the hard copy of this book?

the whole world is going gaga over various indian concepts but indians are busy aping the western world.

Could u please throw some light on different courses that were taught?

Nice to know about our education in ancient India.

Old is Gold. Find advance technology from such books....

Is there any Tamil version of this book

wonder if he has any evidence

Yes primarily due to colonoism

Sahana Singh Your book is here!

Will surely have it in my personal collection.

Shantanu Gokhale let's try and get hold of this

Just Bought your book on Kindle. Will read and give you my review