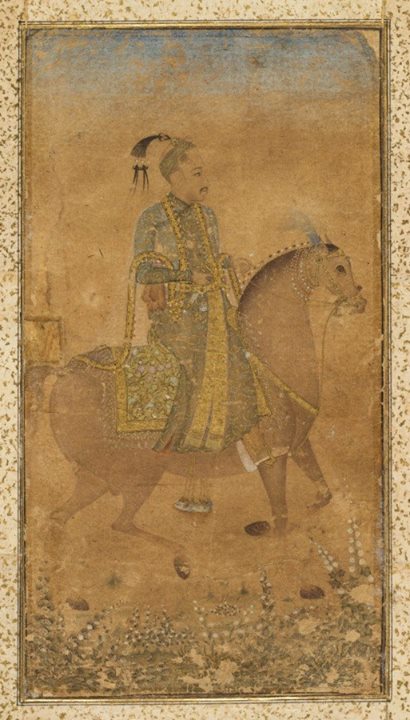 India, Golconda, Deccan, 17th century
Ink with use of watercolor and gold on paper, mounted with gold-sprinkled borders

Sultan Abdullah Qutb Shah came to the throne of Golconda at the age of twelve and ruled until 1635 when the Mughal emperor Shah Jahan invaded the Deccan. Although Sultan Abdullah Qutb Shah kept his position, he did so under conditions named by Shah Jahan that included the payment of tribute money, conversion to Sunni Islam, and the presence of a Mughal political agent at the Golconda court. In this watercolor portrait, executed with subdued colors that complement the gold accents, the young Sultan wears a diaphanous shawl over his richly embroidered robe. His horse is almost as lavishly dressed in decorative trappings and jewels as his rider.

Lovely poet...I was moved listening to his poetry at Golconda fort that's where I discovered Urdu in Hyderabad!!