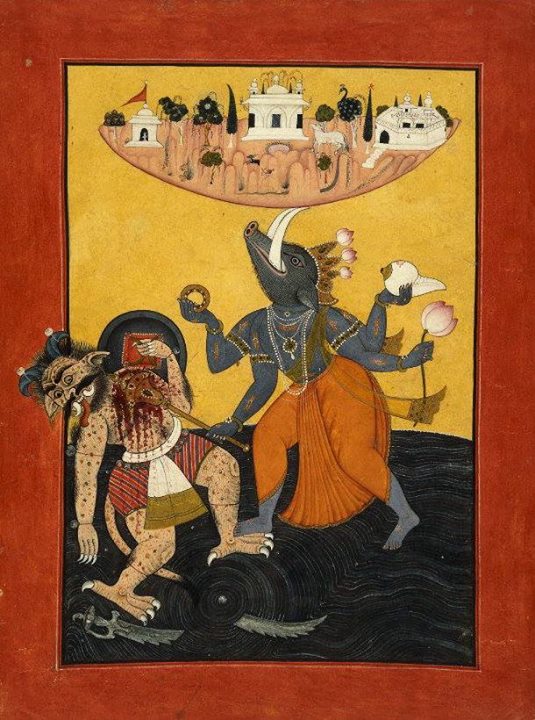 Born into an old, cultured, and affluent family, both his education and literary output were broad and varied. He studied literature under "the foremost teacher of his time, the celebrated Shaiva philosopher and literary exponent Abhinavagupta". He also studied — and wrote about — both Vaishnavism and Buddhism. His literary career extended from at least 1037 (his earliest dated work, Brihatkathāmanjari, a verse summary of the lost "Northwestern" Bṛhatkathā; itself a recension of Gunadhya's lost Bṛhatkathā — "Great Story") to 1066 (his latest dated work, Daśavataracharita, "an account of the ten incarnations of the god Visnu"). In addition to the genres listed below, Kshemendra also composed plays, descriptive poems, a satirical novel, a history, and possibly a commentary on the Kāma Sūtra (all now known only through references in other works)
- Wiki

Image:
Varaha avatara
Viṣṇu as Varaha. In this third incarnation, Viṣṇu appeared as the boar, Varaha, who is depicted in his most renowned story rescuing the earth goddess, Bhudevi, from the sea-demon Hiranyaksha. She is shown as a fragment of the earth, perched on Varaha's tusks and replete with animals and buildings. The artist has taken great pride in including a wealth of detail such as a temple dedicated to Śiva with a fluttering red banner, while among the animals roaming the hilly landscape he has depicted a cow, a symbolic representation of the Earth goddess. This painting shows the climax of the incident: Varaha has just slain his adversary with his formidable mace. Other attributes that Varaha holds in his hands are the wheel, the conch shell and the lotus.

Before books are lost,effort should be made to conserve the first and degitalise them next.

Ramakishor Shastry this may help you..