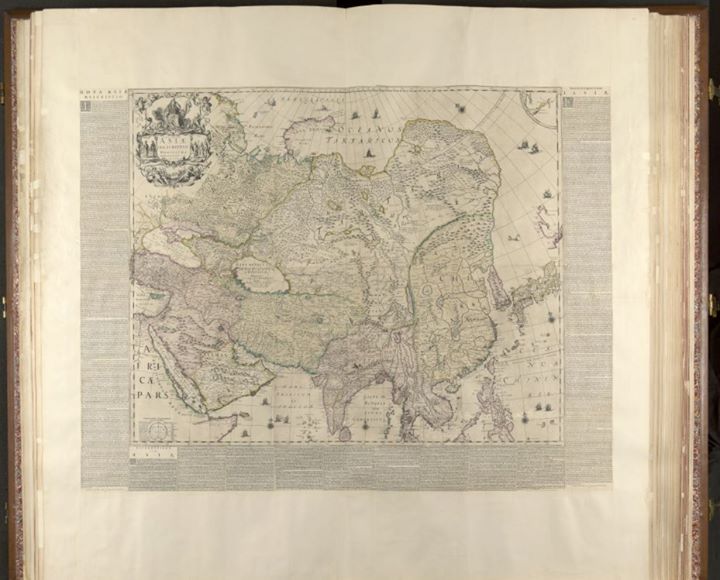 Tom Harper tells the story of the Klencke Atlas, one of the largest atlases in the world presented to Charles II by the Dutch merchant and scholar Johannes Klencke in 1660.
Out of British Library’s ‘banquet of maps’ the Klencke atlas of 1660 is surely the main course. It is also one of the cartographic collection’s best-known objects. Until 2012 it was the largest atlas in the world, and as a result has featured in an array of media including Radio Times magazine, The Guardian newspaper, the Guinness Book of Records and in BBC4’s The Beauty of Maps television documentary. The size, scale and concept of the Klencke atlas impresses today, just as it impressed the diarist John Evelyn in 1660 when he saw it in the King’s cabinet, describing as he did ‘a vast book of mapps in a volume of neare four yards large’. Benefitting from the wide scholarship already available on the atlas, this article will provide a concise summary of its contents and history.

The atlas is named after the man who led a consortium of Dutch sugar merchants in presenting it to Charles II on his restoration to the English throne in 1660. Johannes Klencke (1620?–1672), wished to impress the king and gain favourable trade agreements with Britain. And what better gift to give a king than a giant atlas, its binding bearing tooled symbols of the nations the king claimed as his dominions: England, Scotland, Ireland, and France. Klencke was made a baronet that same year, and the atlas was placed in Charles’s cabinet, amongst his most prized possessions. It was to stay in royal hands for over 150 years.

If the atlas bears the name of its presenter, its conception bears the mark of another: Count Johan Maurits of Nassau-Siegen (1604-1679), one of the most enlightened patrons of art and science in Counter Reformation Europe. Maurits had influence in the courts of Europe, and was responsible for presenting a a lightly smaller atlas – the Great Elector’s Atlas now in Berlin, to the Elector of Brandenburg in 1664. Another, the Rostock atlas of the same year, is almost certain to have had a similar provenance. During his time as governor-general of the Dutch West India Company in Brazil (1636-1644), Maurits patronised a wealth of artistic and scientific endeavour. The resultant map of Brazil by Georg Marcgraf, published in 1647 by Joan Blaeu, provided a concise vision of the Dutch empire abroad, but also, significantly, of the source of the sugar which accounted for up to 70% of Europe’s consumption. Its inclusion in the Klencke atlas is significant to the purpose of the gift, and illustrative of the guiding influence of Maurits.

The India map here is just a larger version of Hondius's classic. Size is not everything though there is much to admire in the forgotten art of large size lithographic printing.

The Herefordshire Mappa Mundi - a large World Map of 14th CE, is worth a dekho too. English world view of the time, in T-O format ( http://www.themappamundi.co.uk/mappa-mundi/ )