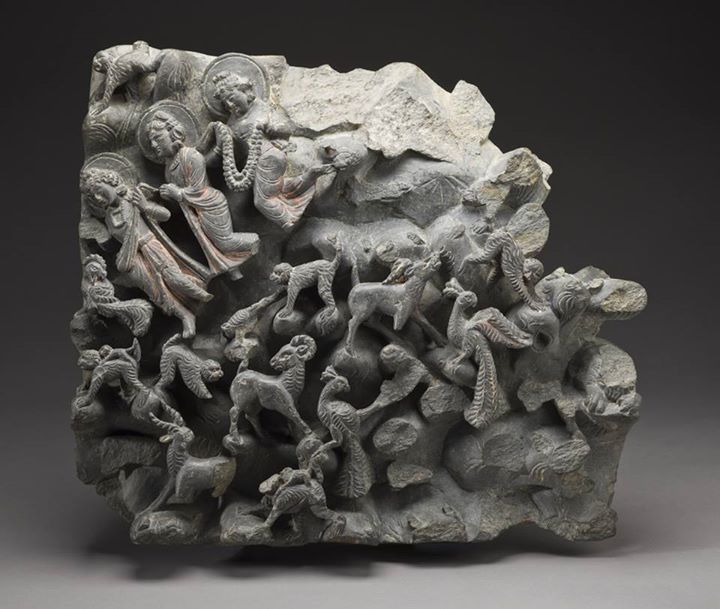 Born into an old, cultured, and affluent family, both his education and literary output were broad and varied. He studied literature under "the foremost teacher of his time, the celebrated Shaiva philosopher and literary exponent Abhinavagupta". He also studied — and wrote about — both Vaishnavism and Buddhism. His literary career extended from at least 1037 (his earliest dated work, Brihatkath?manjari, a verse summary of the lost "Northwestern" B?hatkath?; itself a recension of Gunadhya's lost B?hatkath? — "Great Story") to 1066 (his latest dated work, Da?avataracharita, "an account of the ten incarnations of the god Visnu"). In addition to the genres listed below, Kshemendra also composed plays, descriptive poems, a satirical novel, a history, and possibly a commentary on the K?ma S?tra (all now known only through references in other works)
- Wiki

Image:
Gods and Animals in a Landscape, Fragment from a Scene of Buddha Shakyamuni's Sermon to Indra

In the Jataka tales, Buddha ..in his previous incarnations.. Overcomes adversities through logic and good thoughts/words/deeds..he does not perform miracles.. Only in two instances, he resorts to the power of truth..to overcome the hurdle..that is a storm while in a boat..the path to enlightenment ..is through logic and understanding.. Not magic and miracles.. Or violence..

There is also fragment of a grey coloured stone sculpture depicting birth of Buddha at the Freer Gallery of Art at the Smithsonian Instituition in Washington D.C. Stylistically it is very similar to this one.