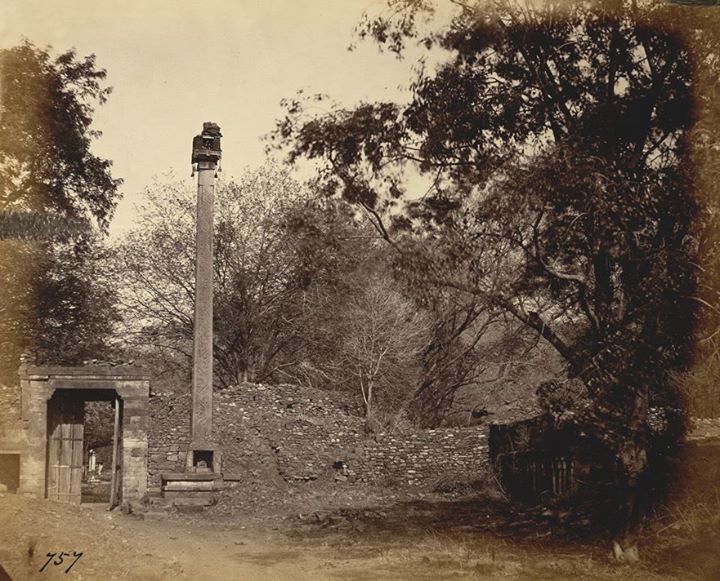 Photograph of the Garudastambha at the Narasimha Temple, Ahobilam in Andhra Pradesh, taken by an unknown photographer in c.1870, from the Archaeological Survey of India Collections. Ahobilam is an important Vaishnava pilgrimage site and the principal place of worship of Narasimha, the lion-man incarnation of Vishnu. The temple complex is divided between upper and lower Ahobilam, built in the late 15th and 16th centuries under the Vijayanagara rulers. The complex consists of nine shrines dedicated to the nine different forms of Narasimha. The entrance gopura is carved with scenes from the Ramayana. The Garudastambha, or pillar, in this view has carvings and inscriptions. D.Ramaswamy Ayyangar in, 'A descriptive history of the forgotten shrines of Ahobilam' 1916, wrote, 'Entering the main gate of the temple, the first thing that strikes our eye is the "Tower of Victory". This is a magnificent tall column of sandstone cut out of one stone and ornamented by architectural carvings on it. It stands on a platform on the southern side of the entrance and the side of the platform contain inscriptions detailing the event this column has been erected to commemorate; viz., the victory of Rangarayalus army over the Muhammadans.'