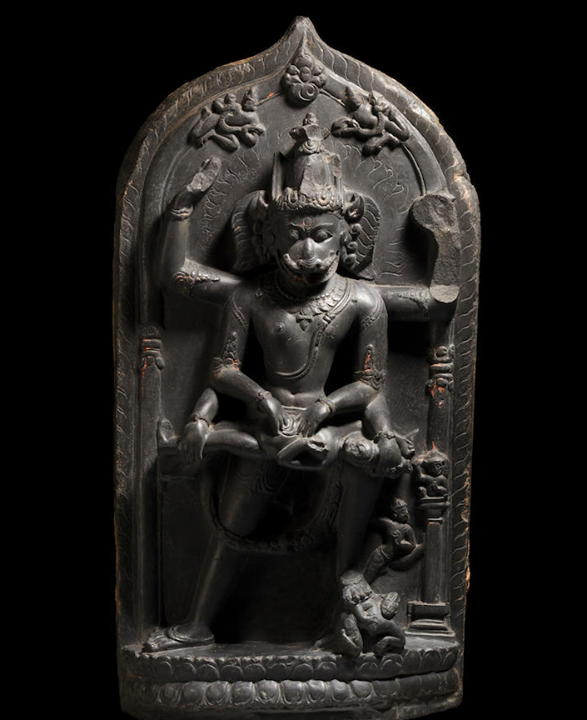 A blackstone stele of Narasimha

Narasimha stands astride a broad lotus base, supporting and disemboweling the demon Hiranyakashipu, he wears jewelry and garments of classic form, his wrathful leonine face framed by a broad mane and surmounted by a tall crown with a lotus bulb at its center, vidyadharas adorn him from above, Hiranyakashipu appears again trampled under the avatar's foot, and to the right, kicking the pillar from which a crouching diminutive Narasmiha emanates.

As recounted in the Bhagavata Purana, Vishnu appears in half-man, half-lion form in order to subdue the adharmic king Hiranyakashipu and restore the balance of creation. His particular form was required in order to exploit a loophole in a boon that Hiranyakashipu was granted. Hiranyakishupu was invulnerable to any living or nonliving thing created by Brahma, by any demigod, demon, human, or animal, and could neither be killed by hand or by weapon, indoors or outdoors, on the ground or in the sky, or during the day or at night. Therefore Vishnu appeared at dusk in composite form, balanced Hiranyakashipu on his leg at the palace threshold, and disemboweled him with his claws.

Stylistically, the type of stone, the stele's composition with the diminutive figures carved in low relief, and the central figure's pose and lean proportions, compare closely to another stele of Narasimha from the Vikramapura near Dhaka.

The subject of Narasimha is a common trope in other schools of Indic sculpture. However, it is very rare within the Pala-Sena corpus, perhaps amounting to fewer than a dozen extant examples.

The description of the image bears some incorrectness

The National Museum of Bangladesh located in Shahbag, Dhaka is a treasure trove of many such artefacts from and around Bikrampur, the ancient capital of Bengal.

Once again a completely different perspective with the unmistakably uncanny timing of this group!

Oh! wonderful and differs those of India!!