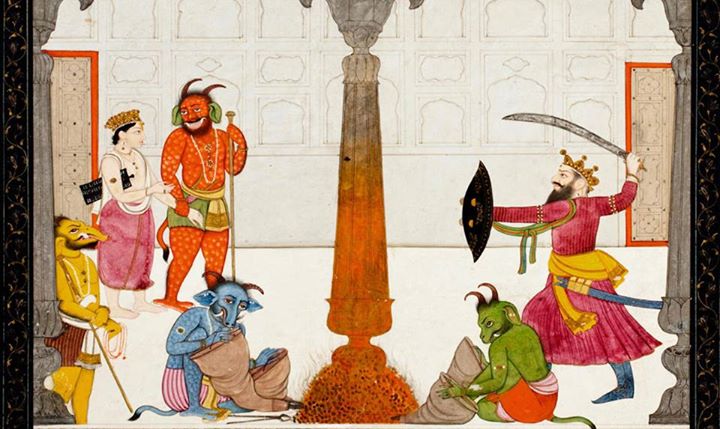 Hiranyakashipu brandishes his sword at a burning pillar concealing Narasimha

With a pile of hot coals set around the base of the column, two demons work bellows to intensify the heat and flames. On the left another demon escorts Prahlada, carrying a writing slate under his arm, to be thrown against the column, while the demon King Hiranyakashipu brandishes his sword and shield in anticipation of Narasimsha’s appearance from the glowing column. A bee buzzes around the column, attracted to Vishnu’s sweet scent, foreshadowing the impending violence.

This imaginative scene appears to be an anomaly in the context of the Bhagavata Purana, whereas depictions of Narasimha disemboweling the evil King Hiranyakashipu after he emerges from the column are common throughtout the Pahari schools.

: a depiction of the stage, just before His appearance... is very rare, indeed! :) but Prahlada... doesn't look scary at all! though is dragged badly towards that deadly fire, he is very happy and excited, because he knows that Lord NaraSimha is just about to appear and protect him... :)