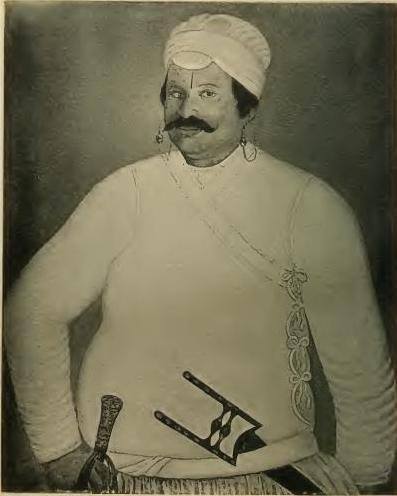 The Private Diary of Ananda Ranga Pillai - VOLUME 2
Dubash to Joseph Franēois Dupleix.
A record of matters political, historical, social, and personal, from 1736 to 1761 Translated from Tamil by the Order of The Government of Madras and Edited By Sir J. Frederick Price
Assisted by K. Rangachari - Superintendent of Records, Government Secretatriat, Fort St.George, Madras
Printed by Superintendent, The Government Press, Madras - 1907

Volume II covers a period commencing with the 23rd April 1746, and ending with the 18th October of the same year — something under six months — and yet the record of this brief space of time forms a volume as large as that of the preceding nine years and seven months, and contains but little in the way of petty details. The central point of interest in the portion of the Diary now placed before the reader is the capture of Madras by the French. Close around this lies the record of what occurred in connection with that event, immediately before and after it took place, and of the quarrels and jealousies which the appearance of de la Bourdonnais on the scene caused between him and Dupleix. I venture to think that the vivid descriptions of these latter which this contains, and the apparently truthful accoimts which Ranga Pillai gives of his conversations with Dupleix regarding de la Bourdonnais, will prove of interest ; and may, perhaps, in a measure assist in clearing points upon which history seems uncertain. Apart from the seizure of Madras, of which, as the diarist was not a spectator of it and had no one on the spot to furnish him with particulars, lie has given but a brief account, much that is interesting, and in some cases amusing, is recorded by him.

It is evident that, although he had not yet been appointed chief dubash at the date on which the present volume closes, he had then become a power in Pondichery, and had gained the confidence of its Governor to an extraordinary degree. That this latter was the case, is evidenced not only by the way in which Dupleix sent for and consulted him on all manner of subjects, including his private affairs, but also by the unreserved tone in which he conversed with him regarding de la Bourdonnais, and the freedom of speech in which he indulged when doing so.Ranga Pillai writes, at some length, in an entertaining and instructive manner, and with shrewd comments thereupon, of the many intrigues which took place with regard to the appointment of chief dubash, the prominent part which Madame Dupleix assumed in these, and the unblushing way in which she bargained for bribes to herself and her husband. In addition to matter (if this nature, there will be found in this volume much that is illustrative of the men and manners, both European and Native, of the India of the period to which it relates.

Some details on the picture please?

prabanjan wrote a novel based on this diary