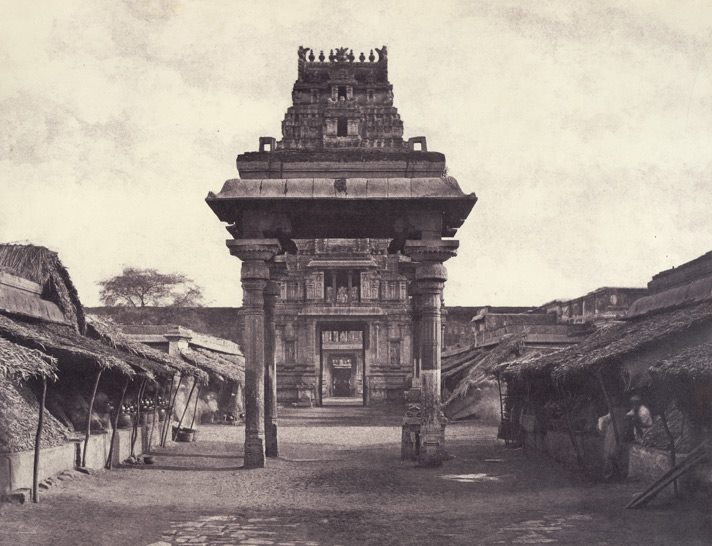 Four-columned mandapa, with the gopura of the Ranganatha Temple, Srirangam - 1858

Photograph of the street towards the open-sided, four-columned mandapa, with the gopura of the Ranganatha Temple beyond, taken by Linnaeus Tripe (1822-1902) in 1858. This is a sacred Vaishnava complex situated on the holy island of Srirangam. The building of the temple started in the Chola period but most of the works were carried out from the 13th to the 17th century under the patronage of the Pandya, Hoysala, Vijayanagara and Nayaka rulers. The temple covers an area of 631,000 sq.mtrs. divided into 7 concentric enclosures with tall gateways or gopuras in the middle of four sides. These gopuras are pyramidal brick and plaster towers covered with bright coloured sculptures and a vaulted end with little pot finials. Tripe was in charge of one of the battalions of the 12th Madras Native Infantry, a regiment funded in 1824 and stationed in Madras. In 1855, Tripe was commissioned to take photographs for the British East India Company and the Madras Presidency which resulted in six albums, one of which is of Srirangam.