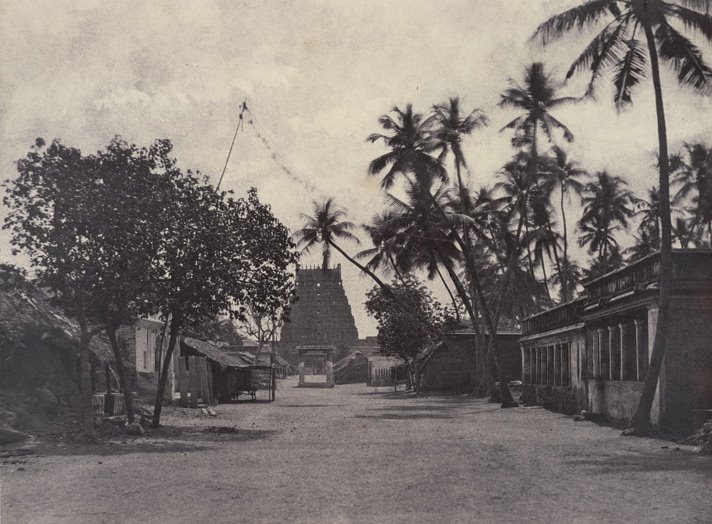 Jambukeshvara temple on the island of Srirangam - 1858

Photograph of a a palm-shaded street towards the distant west gopura of the Jambukeshvara temple on the island of Srirangam, taken by Linnaeus Tripe (1822-1902) in 1858. This sacred complex dates mostly from the 17th century Nayaka period and is consecrated to Shiva. The innermost sanctuary stands in the centre of four concentric enclosures entered through seven pyramidal gateways or gopuras covered with elaborate sculptures painted in bright colours.Tripe was in charge of one of the battalions of the 12th Madras Native Infantry, a regiment funded in 1824 and stationed in Madras. In 1855, Tripe was commissioned to take photographs for the British East India Company and the Madras Presidency which resulted in six albums, one of which is of Srirangam.

One of 4 pancha bhootha sthalams of Shiva in Tamil Nadu. The other is in kalahasthi. This temple represents water. The towers of the thiruvanaikaval temple and the srirangam temples are a sight to behold from the top of the rock fort temple in trichy, especially when the cauvery is in spate. The cauvery is at its broadest (akhanda cauvery) in it's entire course in Srirangam

Where are the other photos of this album?