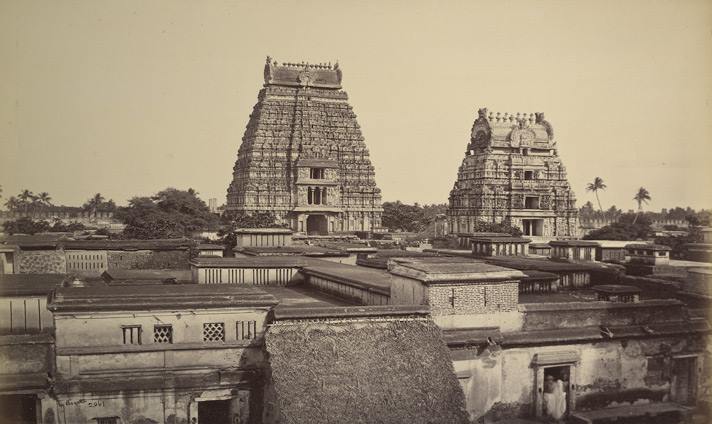 Srirangam is famous for its Sri Ranganathaswamy Temple, a major pilgrimage destination for Hindus (especially Srivaishnavites) and the largest temple complex in India.

According to the temple's website, Srirangam can be considered the biggest functioning Hindu temple in the world, as it covers an area of about 631,000 square metres (6,790,000 sq ft) with a perimeter of 4 km (10,710 ft). Angkor Wat is bigger but non-functioning. (Wiki)

Image :
Photograph of the gopurams at the Ranganatha temple at Srirangam, taken by Samuel Bourne in 1869. The Ranganatha temple is a Vaishnava complex situated on the artificial island of Srirangam in the Cauvery River near Tiruchirapalli. The building of the temple started in the later Chola period in the early 11th century but much of it was added on from the 13th to the 17th century under the patronage of the Pandya, Hoysala, Vijayanagara and Nayaka rulers. The temple, the largest such complex in India, divided into 7 concentric enclosures with tall gateways or gopurams in the middle of four sides. The gopurams increase in size from the innermost encloure outwards. These gopurams are pyramidal brick and plaster towers covered with bright coloured sculptures and are vaulted on top with little pot finials.

I visited this in late 70s. Wasn't aware of the size though.