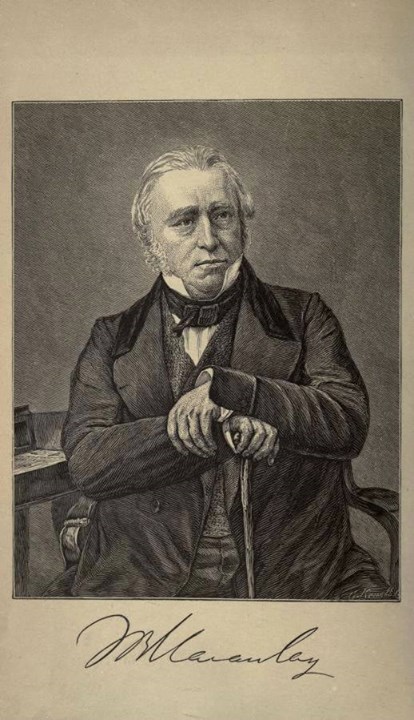 Essay:
A dubious quotation, a controversial reputation: the merits of Lord Macaulay
By Koenraad Elst

Koenraad Elst discovers through a wrong quotation attributed to Lord Macaulay how right the anglicizer of Indian culture was, or at least how right his intentions were, subjectively.

1. Macaulay the terminator
In Hindu nationalist circles, the name Macaulay is synonymous with cultural estrangement of Hindus from Hindu civilization, starting with their linguistic assimilation into the global Anglophone community. "Macaulayites", anglicized Hindus, are named together with Muslims, Missionaries and Marxists as the irreconcilable enemies of Hindu Dharma, the "4M". The rot allegedly started with Lord Thomas Babington Macaulay (1800-1859), member of the governing council of the East India Company from 1834 to 1838, who successfully advocated the replacement of the native languages with English as the medium of education. He formulated his policy proposal in his Minute on Indian Education, delivered in Kolkata on 2 February 1835. The Governor-General of India, William Bentinck, approved the proposal on 7 March 1835, so that it became the cornerstone of British-Indian educational policy until Independence (and remained largely in force after that as well). To impress upon us the magnitude of the disaster Macaulay allegedly wrought, his critics like to quote this appreciation by his biographer G.D. Trevelyan: "A new India was born in 1835. The very foundations of her ancient civilization began to rock and sway. Pillar after pillar in the edifice came crashing down."

1.1. A terrible quote
Along with the Minute, other statements by Macaulay have been culled from his speeches and letters in order to prove the evil colonialist designs behind his education policy. Not only Hindu nationalists, but generally Hindu and generally nationalist sources frequently quote the following musings supposedly uttered by Lord Macaulay in Parliament:

"I have traveled across the length and breadth of India and I have not seen one person who is a beggar, who is a thief. Such wealth I have seen in this country, such high moral values, people of such calibre, that I do not think we would ever conquer this country, unless we break the very backbone of this nation, which is her spiritual and cultural heritage, and, therefore, I propose that we replace her old and ancient education system, her culture, for if the Indians think that all that is foreign and English is good and greater than their own, they will lose their self-esteem, their native self-culture and they will become what we want them, a truly dominated nation."

The quote is usually referenced as "Macaulay, British Parliament,1835". In that year, Macaulay was actually in India, though other oft-quoted speeches by him on the same subject had indeed been delivered in Parliament, but in 1833. However, I discovered this anomaly only later in the course of the debate. What first made me suspect the spuriousness of the quotation, was not any external information but a close reading of its utterly cynical contents, quite imaginable in the private scheming of hard-nosed colonialists but rather out of style in the setting of a parliamentary debate. Politicians who try to sell a policy will normally present it as beneficial. This was especially true for that particular stage of colonial expansion, when the "imparting of civilization" and the "abolition of slavery" had become commonplace justifications for the colonial enterprise. British imperialists liked to think of themselves as bringers of light in the darkness of the primitive societies which they were about to rule and transform. Yet, here we get to hear Macaulay brutally calling for the wilful destruction of a civilization which he praises to the skies and acknowledges as superior to that of Britain itself.

So, I challenged my Hindu correspondents to give a reliable reference for this strange quotation. In the age of the internet, they had no problem coming up with a great many seemingly authoritative sources for Macaulay's damning statement. Among the highly varied instances of its use, we may mention numerous Hindu websites including www.aryasamaj.org (in a review by B.D. Ukhul of the "Macaulayite" book The Myth of the Holy Cow by Prof. D.N. Jha), www.veda.harekrishna.cz, and many more; but also a document by the Planning Commission of the Government of India; and even a speech by the President of India, as reported:

"While seated as the chief guest on the dais of the Jamia Millia Islamia's auditorium and about to deliver his convocation address President A.P.J. Kalam fiddled for a moment with the keyboard and mouse of his laptop. (*) The President quoted Macaulay's 1835 speech in British Parliament, 'I do not think we would ever conquer this country (India), unless we break the very backbone of this nation, which is her spiritual and cultural heritage, and, therefore, I propose that we replace her old and ancient education system, her culture, for if the Indians think that all that is foreign and English is good and greater than their own, they will lose their self-esteem, their native self-culture and they will become what we want them, a truly dominated nation.'"-S. Zafar Mahmood, "Learning from the President", The Hindu, 2-9-2004.

The President of India, a good man and a top-ranking scientist, may seem to be a very authoritative source, but to a historian, even he isn't good enough. Nobody so far has been able to trace this quotation to an original publication of Macaulay's speeches, though such published collections exist (e.g. Macaulay, Prose and Poetry, selected by G. M. Young, 1957; Speeches and Documents on Indian Policy, 1750-1921, edited by A. Berriedale Keith, 1922; Life and Letters of Lord Macaulay by George Otto Trevelyan, 1876). It is unlikely that they ever will, and they could have realized as much by carefully rereading the one source to which all the extant instances of this quotation can apparently be traced.

After the backlash from India, the British decided to delete the quote and make it disappear!

Incorrect information in above comment - " teaching methods that had 8been conducted largely in Persian " in 1835. Not even 5% of Indians spoke ( lesser wrote) persian in 1830s. The education was in various Indian languages and Indian scripts, all phonetically arranged in a unified akshara system, regardless of the script. The vedas formed the base of education outside of the madarsas and christian educational institutions.

ADDENDUM to previous post : The continuing notoriety and controversy in India that surrounds the name ‘Macaulay’ -- and that seems to border on a national obsession -- proves slightly perplexing to most British observers. Outside of specialist academic circles, Macaulay -- that great demon of latter day Indian nationalists -- is barely remembered in Britain, and if he is recalled at all it is usually as a Whiggish historian rather than as a politician. Whenever an Englishman glances through the Indian press of today , and finds the Macaulayite policies of the 1830s being discussed critically in a contemporary political context, he can’t help but imagine what reaction he might have if upon opening a modern British newspaper he were to read : " Do we really need this Great Reform Act " ?? Or " Have we really thought this repeal of the Corn Laws through ??" .... (Footnote : I say this firmly tongue in cheek, of course.) Macaulay -- who spent only a very brief period on the sub-continent -- and has been dead for 158 years – clearly remains well known in India for his infamous ‘ Minute ‘ -- a document that continues to earn either warm applause or severe reprobation depending on one’s own personal cultural/ historical/ political perspectives and sensibilities. He is also held in contempt (deservedly so) for a handful of rather disparaging remarks about Hindu and Islamic culture( “ worthless library shelves “ and so on) .... the extensive legal reforms that he helped to introduce , many of which were quite far-sighted for their times, are as a result largely forgotten. A final point : it is worth remembering -- with a certain amount of irony -- that the introduction of English as the principal language of instruction at EIC funded schools and colleges from 1835 onwards, came at the expense of teaching methods that had been conducted largely in Persian (another language non-indigenous to India) and that in the England of those days, most privately educated schoolchildren were being taught in Latin or Greek !

" More second hand nonsense has been spoken about it [ Macaulay's Minute on Education ] than on almost any other event in British-Indian history. " -- Edward Thompson (1937)