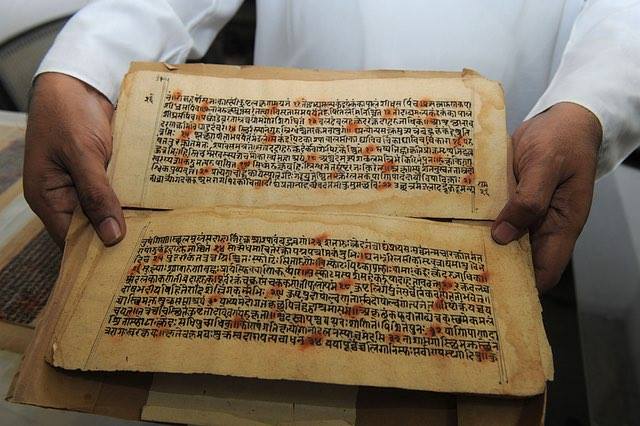 What explains the refusal of India’s leftists to honour what is honourable in Indian history and traditions?

India has one of the greatest intellectual traditions in the world and it has nothing to do with modern Indian leftist scholars and writers. It is the tradition of numerous yogis, sages and seers going back to the Vedas, extending through Vedanta, Buddhism and related dharmic traditions to their many exponents today.

Dharmic traditions teach us how to develop the mind in the highest sense of universal consciousness, not simply logic and conceptual thought. India’s great minds, centuries ago, produced the many paths of yoga and the largest variety of exalted spiritual philosophies and psychologies in the world. And their teachings remain alive and vibrant even today, spreading globally.

Yet, India’s dharmic tradition has not just addressed consciousness and spirituality, but has also produced a vast literature on art, science, medicine, mathematics and politics – all the main domains of thought and culture.

At the turn of the twentieth century, Swami Vivekananda transformed world thinking, introducing yoga, meditation and higher states of consciousness at a time before Einstein had discovered the relativity of time and space and the illusory nature of physical reality, something long taught in Vedanta and Buddhism.

Sri Aurobindo unfolded the idea of a higher evolution of consciousness in humanity and produced Savitri, the longest blank verse poem in the English language, revealing transformative yogic secrets that the West had yet to conceive. Yet, many of these great Indic thinkers wrote in Sanskrit or regional languages of India and have not been properly noted, much less studied.

Vedantic teachers like Swami Chinmayananda and Swami Dayananda have guided India in recent decades, commenting on cultural as well as spiritual affairs, using English as their main language of expression, so that the modern audience can easily understand them. Ram Swarup and Sitaram Goel produced excellent critiques of communism and Western religious fundamentalism.

New Yoga teachings have come out from India’s modern gurus, too numerous to mention, and there is now a detailed modern literature on Ayurvedic medicine in English. New books on India’s past have been written by important archaeologists and historians, uncovering the depth and antiquity of India’s many-sided civilisation.

Meanwhile, there is a dynamic new generation of insightful and articulate Indic/dharmic writers with new books and articles, and active in the social media, including Sanjeev Sanyal, Hindol Sengupta, Vamsee Juluri, Tufail Ahmad, and Amish Tripathi. Prime Minister Narendra Modi has been an important part of this intellectual/media awakening of pro-India scholars and writers, who honour the profound traditions of the country going back to ancient times.

India’s Left has long claimed that Hindus are not intellectual and are unscientific, mindlessly repeating old racist colonial and missionary propaganda. Yet the Left has not produced any original thinkers, much less sages. It hasn’t even understood India’s own vast culture, which is the saddest commentary on its endeavours. India’s leftist scholars are largely Lord Macaulay’s children, promoting Western thought, disowning India’s older and more extensive cultural heritage.

India’s Left has no understanding of higher states of consciousness, as clearly explained in the dharmic traditions, or any interest in exploring them. It is wedded to gross materialism and physical reality, preferring to write about sex and politics, not anything transcendent. While traditional Hindu thought recognises seven chakras from basic human urges to the highest cosmic consciousness, leftist writers are happy to wallow in the lower one or two, as if they were contributing something exalted to the world.

While modern physics is embracing the idea of cosmic consciousness and great physicists like Oppenheimer have quoted the Bhagavad Gita, India’s Left is firmly caught in the outer world of maya, which it does not question. It has little sense of cosmology and not much vision beyond political propaganda. Yet, India’s scientists honour their own spiritual traditions like Subhash Kak and George Sudarshan, who are not products of the Left.

India’s leftists seldom learn Sanskrit or study the great philosophers, thinkers and poets of the country. While they can quote Shakespeare they deem it’s beneath their dignity to honour Kalidas. They cannot examine the Ramayana or Mahabharata except in terms of Marxist or Freudian theories. They may discuss women’s rights but have no experience of India’s powerful traditions of Goddess worship. They are like the children of the old British Raj for whom anything Indian, particularly Hindu, is primitive superstition to be frowned upon.

Indian immigrants now make up the highest strata of Western society in terms of education and affluence, comprising doctors, engineers, scientists, and software developers, most of who are respectful of India’s spiritual traditions. They are not products of the Left either.

India’s leftists, meanwhile, take academic posts both in India and the West, from which they can take potshots at their own culture and pretend to be wise while drawing comfortable salaries from the very governments they like to criticise. They would never practice yoga, mantra or meditation, as the people in the West are now doing more and more – including many thinkers and innovators. Note the example of Steve Jobs of Apple Computers, who carried Paramahansa Yogananda’s Autobiography of a Yogi with him, and probably never heard of Romila Thapar, Ram Guha or Irfan Habib.

In this regard I am happy that Murty Classical Library of India is now an established series, for those of us who can't read non-Western languages in particular. As for the debate going on here on this thread, it sounds very healthy that India is trying to rediscover her heritage. Of course, doing this will involve certain more quasi-fundamentalist rightists and some more self-loathing leftists screaming at each other, but as a student of Nagarjuna's middle way, I look towards the eventual synthesis.

What utter rubbish - your FB page should not engage in polemic based on half truths and generalisations. Political ideology and saffron crap are not interesting.

To be fair , more damaging are today's right wing "Hindus" . If Vivekanada was around today he would be appalled by the narrow interpretation of "Hinduism" and the traditions of the sub subcontinent that is being pushed down others. He was very critical of the orthodox so called "Hindus". Who spend more time and effort spreading in his words their "kitchen culture" than exploring the intellectual and philosophical aspects of "Hinduism". And the term is "exploring" not teaching . I have always believed there was a culture of exploration and intellectual freedom to question and challenge. Unfortunately what is today considered as its revival is far from that.

Fine article! Thank you so much! Aurobindo and Vivekananda spoke about creating super men & women through the ancient science called YOGA. They were enlightened swamis who spoke of the world as one people! They wished the best for all irrespective of their culture! Don't belittle their teaching by calling them "leftists "!

The personalities mentioned here are respected by each every Bengali, be it the Leftists, Centrist or Rightist. Has any one heard Left speaking against any of them?If not then why do such baseless rumors spread. Please don't get intolerant enough to spend lies about groups of people. Vivekananda's and Arobindo 's thoughts are themselves part of leftist thoughts.

I have come across Frawley before. I don't remember the subject but he was writing junk then, and he's writing junk now: "Swami Vivekananda transformed world thinking, introducing yoga, meditation and higher states of consciousness at a time before Einstein had discovered the relativity of time and space and the illusory nature of physical reality, something long taught in Vedanta and Buddhism." There is no correlation between Einstein's work and that of the yogis et al. Einstein was working on the physical relationship between space, time, the "speed of light",.. His work resulted in a profound realignment of how we understand the universe. The work of the yogis et al is on how we understand ourselves, other people. and our understanding of the events around us. There is no correlation. "modern physics is embracing the idea of cosmic consciousness" Utter nonsense. "Indian immigrants now make up the highest strata of Western society in terms of education and affluence, comprising doctors, engineers, scientists, and software developers" Greatly overstating it. Indians are certainly to be found among those groups but they do not make up the highest strata, they are many others. "the example of Steve Jobs of Apple Computers, who carried Paramahansa Yogananda’s Autobiography of a Yogi with him, and probably never heard of Romila Thapar, Ram Guha or Irfan Habib." Note the weasel word "probably". He has no idea what Jobs knew but is happy to make it up.

Communists believe Life started after Marx and will be extinguished if some other philosophy enters their life, and partially they are correct, just see what Soviets did when they had a chance, TODAY as communism breathes it's last , they desperately join hands with Islamic terrorists, Leftists Armed bandits

Follow evolution of human thoughts.....past is history...to be studied and use where necessary in modern lives...

I am happy to see foreigners being welcomed to write about India and its traditions.Great signature ! Many salutations.Please begin from where the english left off...And intellectually so stimulating with Hon'ble Modi's erudition..

Article tried to explain how British people when ruled India had degraded our traditions which had inner meaning and spiritual oriented.

Unfortunately the Hindu right is more ignorant of its own history and traditions than the liberal left intelligentsia.

Red ideology the most dangerous its Rule of Gundas over society

Because they are McCauley's brainwashed children.

Akshay Kawatkar some stuff to go through