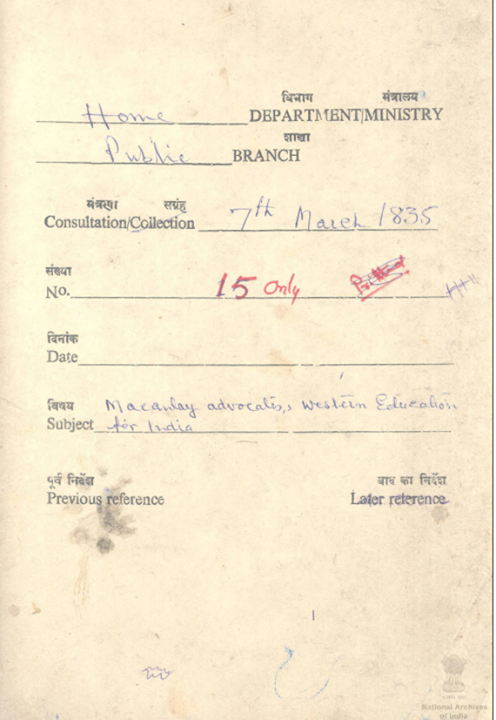 The original record can be viewed at the National Archives of India site:

The 'actual' Macaulay's Minute on Education, by the Hon'ble T. B. Macaulay, dated the 2nd February 1835.

The 'actual' Macaulay's Minute on Education, February 2, 1835 Minute by the Hon'ble T. B. Macaulay, dated the 2nd February 1835. As it seems to be the opinion of some of the gentlemen who compose the Committee of Public Instruction that the course which they have hitherto pursued was strictly prescribed by the British Parliament in 1813 and as, if that opinion be correct, a legislative act will be necessary to warrant a change, I have thought it right to refrain from taking any part in the preparation of the adverse statements which are now before us, and to reserve what I had to say on the subject till it should come before me as a Member of the Council of India. It does not appear to me that the Act of Parliament can by any art of contraction be made to bear the meaning which has been assigned to it. It contains nothing about the particular languages or sciences which are to be studied. A sum is set apart "for the revival and promotion of literature, and the encouragement of the learned natives of India, and for the introduction and promotion of a knowledge of the sciences among the inhabitants of the British territories." It is argued, or rather taken for granted, that by literature the Parliament can have meant only Arabic and Sanscrit literature; that they never would have given the honourable appellation of "a learned native" to a native who was familiar with the poetry of Milton, the metaphysics of Locke, and the physics of Newton; but that they meant to designate by that name only such persons as might have studied in the sacred books of the Hindoos all the uses of cusa-grass, and all the mysteries of absorption into the Deity. This does not appear to be a very satisfactory interpretation. To take a parallel case: Suppose that the Pacha of Egypt, a country once superior in knowledge to the nations of Europe, but now sunk far below them, were to appropriate a sum for the purpose "of reviving and promoting literature, and encouraging learned natives of Egypt," would any body infer that he meant the youth of his Pachalik to give years to the study of hieroglyphics, to search into all the doctrines disguised under the fable of Osiris, and to ascertain with all possible accuracy the ritual with which cats and onions were anciently adored? Would he be justly charged with inconsistency if, instead of employing his young subjects in deciphering obelisks, he were to order them to be instructed in the English and French languages, and in all the sciences to which those languages are the chief keys? Download pdf: http://bit.ly/2pjmYWF

Thanks to Angelo Pugliese for this brilliant find!

Macaulay said in British Parliament:- " "I have traveled across the length and breadth of India and I have not seen one person who is a beggar, who is a thief. Such wealth I have seen in this country, such high moral values, people of such calibre, that I do not think we would ever conquer this country, unless we break the very backbone of this nation, which is her spiritual and cultural heritage, and, therefore, I propose that we replace her old and ancient education system, her culture, for if the Indians think that all that is foreign and English is good and greater than their own, they will lose their self-esteem, their native self-culture and they will become what we want them, a truly dominated nation."

Great thing Macaulay proposed & british implemented. All bahujans, backward & socially & economically deprived & depressed class of india are indebted to him for introducing & imparting modern education to all Indians. Leave apart modern education, education itself was not permitted to them.

Macaulay's proposition seemed to be based on the assumption that there was no knowledge in Sanskrit literature (compared to European literature). No one would have bothered to question this assumption, they might have wanted additional funds to be sanctioned for the new undertaking that they were proposing

The text that brought down Dharmic education for Indians, ended the great tradition of Strota learning, and started the trend of demonizing Brahmins across India. What a wonderful pile of dung!