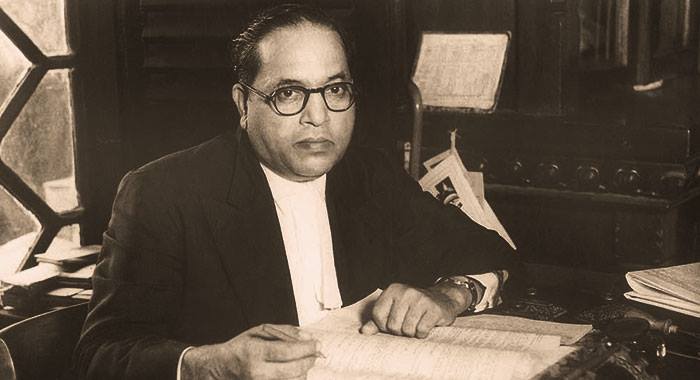 Ambedkar rejected the Aryan race/ invasion theory. He admired the Vedic civilization, and saw the implementation of the Manu Smriti as the beginning of the degeneration of Hindu society, from casteism to the treatment of women.

Dr Bhimrao Raamji Ambedkar was an ethical pragmatist and a practical patriot. He realized that if Hindus remain disunited, the future of nation was doomed. Hindus need to be united, not momentarily in flashes of emotion or hours of crisis, but in a sustained manner. His solution to achieve a sustained Hindu unity, both cultural and political, was to abolish the caste system completely. though he wanted to protect Hindu society, he had been one of the harshest critics of Hinduism itself (see Hindutva and Dr Ambedkar, Swarajya, September 2015).

The public psyche has been fed to saturation with his quotes sneering at Hinduism and his statements denouncing Hinduism in no uncertain terms. “I was born a Hindu but will not die one” is a statement that has been made widely popular by a section of his followers. However, going through the writings of Dr Ambedkar, one finds that he has used the word “Hindu” in two ways. At one level of association, the term refers to what he would call the “Brahminical” or smriti-based religious system that consistently endorses birth-based discriminations. Unfortunately, even today most of the traditional “Hindus” fall in this category.

But in other places, he uses the term “Hindu” in a different sense—to embrace all indigenous spiritual traditions of India. A good instance is where he discusses the linguistic states problem. Dr Ambedkar was happy that not only had India obtained freedom it was also free from the internal threat of a sizeable Islamist presence. But he was extremely worried that they might lose it in linguistic feuds:

“I was glad that India was separated from Pakistan. I was the philosopher, so to say, of Pakistan. I advocated partition because I felt that it was only by partition that Hindus would not only be independent but free. If India and Pakistan had remained united in one state, Hindus, though independent, would have been at the mercy of the Muslims. A merely Independent India would not have been a free India from the point of view of the Hindus. It would have been a government of one country by two nations and of these two, the Muslims without question would have been the ruling race, notwithstanding Hindu Mahasabha and Jana Sangh. When the partition took place, I felt that god was willing to lift his curse and let India be one, great and prosperous.” (Thoughts On Linguistic States, 1955) This was written only a year before he converted to Buddhism.

It may seem like a paradox that the author of Riddles of Hinduism should be euphoric about Hindus becoming free of the Islamist threat. A holistic reading of the writings of Dr Ambedkar provides an answer.

Dr Ambedkar had visualized the Vedic community as an egalitarian one. His own study of Vedic literature led him to reject the Aryan Race Theory concocted by the British. He came to an entirely different conclusion regarding the nature of that class of people called the Shudras. Till then, most scholars had meekly accepted the British theory of Aryan invasion and Shudras were considered as the subdued and enslaved natives.

In the preface to his monumental book Who Were the Shudras? (1946) Dr Ambedkar expressed his thankfulness: “…to the writer of Adhyaya LX of the Shanti Parva of the Mahabharata. Whether it is Vyasa, Vaiashampayana, Suta, Lomaharshana or Bhrigu, it is difficult to say. But whoever he was, he has rendered great service by giving a full description of Paijavana. If he had not described Paijavana as a Shudra, the clue to the origin of the Shudra would have been completely lost.”

In a crucial passage, he further noted whom the book would actually appeal to. They were neither those who took a literal meaning of the scriptures nor the anti-hindus: “The only class of hindus who are likely to welcome the book are those who believe in the necessity and urgency of social reform. The fact that it is a problem which will certainly take a long time to solve and will call for the efforts of many generations to come, is in their opinion, no justification for postponing the study of that problem. Even an ardent Hindu politician, if he is honest, will admit that the problems arising out of the malignant form of communalism, which is inherent in the Hindu social organization and which the politically minded Hindus desire to ignore or postpone, invariably return to plague those very politicians at every turn. These problems are not the difficulties of the moment. They are our permanent difficulties, that is to say, difficulties of every moment. I am glad to know that such a class of Hindus exists. Small though they be, they are my mainstay and it is to them that I have addressed my argument.”

Thus his historic analysis was aimed at “politically minded Hindus” and he cautions them not to “ignore or postpone” the problem that plagues Hindu political and social unity. The whole discourse of Dr Ambedkar was aimed at the proponents of Hindutva. He was offering them a clear and holistic road map to realize the elusive goal of Hindu Sanghatan. Sure enough, Who Were the Shudras? is today is one of the most cited books by the Hindutvaites than by any other political group in India. Most political groups have consistently employed the Aryan Invasion Theory as part of their critique against Hindutva (“Hindus too are outsiders”). Further movements like Dravidian racism has advocated a vision of India through the prism of Aryan-Dravidian racial conflicts. In such an ideological alignment, the rejection of the Aryan theory by Dr Ambedkar becomes crucial in creating a scholarly and socially relevant discourse by Hindutvaites while rejecting the race-based interpretations.

Though Swami Vivekananda and Sri Aurobindo had expressed their scepticism and even rejection of Aryan race/invasion theory, the credit goes to Dr Ambedkar for systematically questioning the basis of the theory and make Indians aware of the colonial myth that was being posited on them as their history. In Who Were The Shudras? he writes:

“That the theory of the Aryan race set up by Western writers falls to the ground at every point goes without saying. This is somewhat surprising since Western scholarship is usually associated with thorough research and careful analysis. Why has the theory failed?…anyone who cares to scrutinize the theory will find that it suffers from a double infection. In the first place, the theory is based on nothing but pleasing assumptions and inferences based on such assumptions. In the second place, the theory is a perversion of scientific investigation. It is not allowed to evolve out of facts. On the contrary, the theory is preconceived and facts are selected to prove it. The theory of the Aryan race is just an assumption and no more.”

Manu Smriti is a text for its time, and was never "implemented". So Mr Neelakanthan is wrong on that count. Secondly while varna was hereditary, it was largely theoretical in what it intended to achieve. Division of labor was definitely not based on varna. We've had brahmin warriors, Kshatriya poets and philosophers, vaishya kings, Shudra emperors. So Mr Ambedkar is attacking a strawman here if he believes that Varna was a Hindu reality of significant consequence beyond the texts. Even today, the only varna that has survived from ancient times is the Brahmin varna. The other varnas barely exist in a recognizable form. Many many castes are unsure of their varna to this day. Eg : Are Khatris kshatriyas or brahmanas or shudras? Are Jats shudras or kshatriyas? Are Kayasthas shudras or brahmanas or vaishyas? Do Kshatriyas and Vaishyas even exist in southern india? Or is southern india a 2-varna society? These are the hard questions that are seldom asked. Let alone answered. Varna and Jati are as different as chalk is from cheese and one mustn't use these terms interchangeably. Yet, it is a common pitfall most people fall into, including Ambedkar, and it seems Neelakanthan as well. "Traditional" hindus don't have to be apologetic about Varna. It was a social system, largely theoretical in its design, and not a living reality. While Jati on the other hand, is a living reality. And its roots and evolution are entirely secular and little to do with Hinduism. The other pitfall seldom avoided by many commentators is this tendency to mistake religious sects for Jaatis. For instance : Lingayat is NOT a jati. Iyengar is not a Jati. Iyer is not a Jati. Madhwas are not a Jati. These are religious sects, with very specific religious traditions and religious lineages. So when a Madhwa says he won't marry a Smartha, that's no different from a Presbyterian saying he woulnd't like to marry a Catholic! This is not Caste at all. These are different religious traditions. And it is natural for them not to mix too easily. Regarding AIT and Ambedkar's denouncement of the same : Well, AIT (or AMT in its modified forms) still remains a plausible hypothesis in serious academic circles. Sure, there are cracks in it. And yes, many idiots oversimplify it or use it for political faultline generation (like the Dravidianists of the south). But that doesnt make the theory an evil one. AMT or AIT is an academic area. And subscribing or not subscribing to it is an academic position. Subscribing to it doesn't make one left wing nor does not subscribing to it make one right wing. One can be a conservative AMT subscriber. Or a liberal "Vedic IVC" theorist! :) Ambedkar with all due respect, had not the qualifications to comment on AIT. If I need to form an opinion on the same, I would read latest research and not him (or Neelakanthan).

It is good that Ambedkar was a better constitutional craftsman than he was a serious historian.