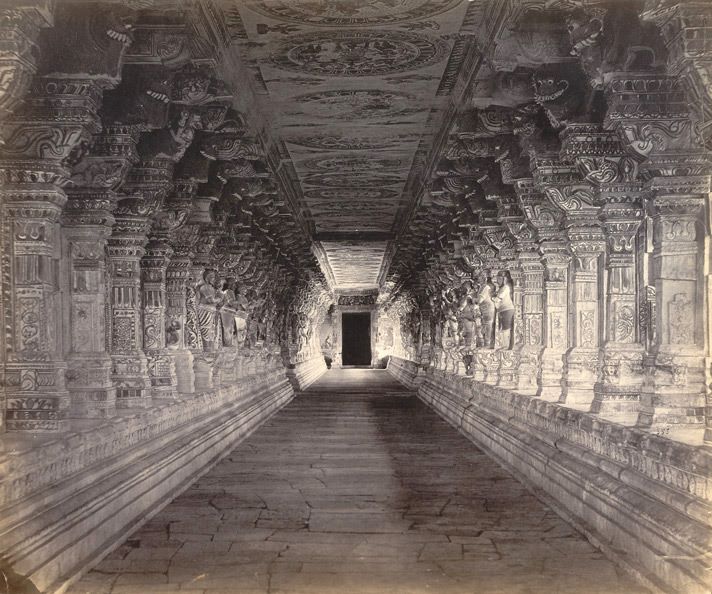 Photograph of the Ramalingeshvara Temple complex in Rameswaram from the 'Photographs to Illustrate the Ancient Architecture of Southern India' collection, taken by Edmund David Lyon in c. 1868. This complex is situated on the sacred Hindu island of Rameswaram and is connected to the mainland by a causeway. It is believed to be the site where Rama worshipped Shiva after the battle of Lanka, part of the Ramayana epic. The temple complex was founded during the Chola period but was constantly added to, and what remains belongs mostly to the Nayaka period of the 17th and 18th centuries. The complex is contained within high walls and entered through tall towered gopuras (gateways) on three of four sides. These gateways lead to a long colonnade that surrounds the enclosure. This is a view looking along the richly-carved and painted Chokkattam Corridor of the Temple; Lyon wrote: 'To see this Pagoda to its best advantage, it should always be entered at its west side, and proceeding thither and passing under the tower...through the door, the view represented in the photograph is seen; and the reason at once becomes apparent why this temple is so celebrated... the figures carved on the pillars being those of the Rajahs of Ramnad on the right, and their private secretaries facing them on the left.'

Is a photo like this even possible these days? Many major temples ban cameras completely, and a friend told me that this was the case here as well, now.

You stupids idiats it is not complex