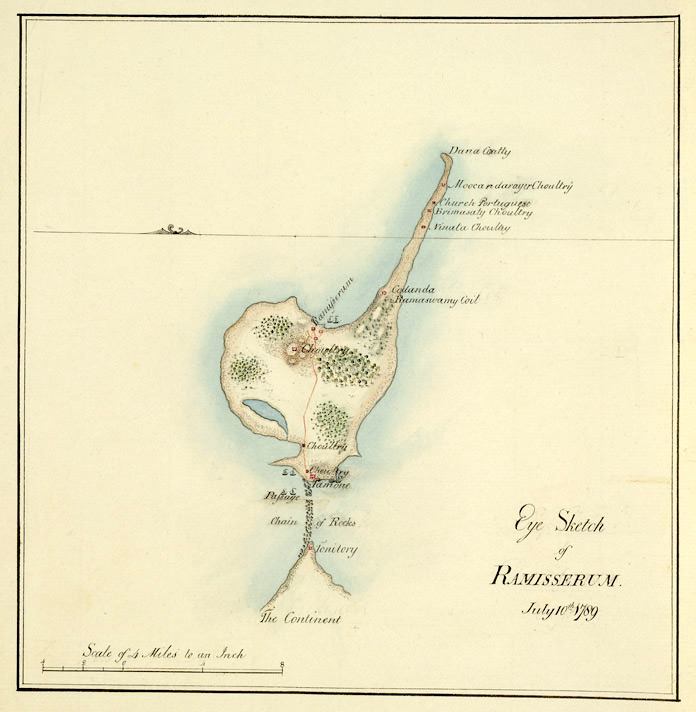 Sketch-map of Rameswaram in pen-and-ink and water-colour, dated 10 July 1789. Inscribed on front in ink: 'Eye Sketch of Ramisserum. July l0th 1789.'

The sacred Hindu island town of Rameshwaram is situated at the extreme south eastern limit of India and is connected to the mainland by the 2 kilometer long Indira Gandhi Bridge. It is an important Hindu pilgrimage site as it is believed to be the place where Rama worshipped Shiva after crossing over from Sri Lanka where he killed Ravana who had abducted his wife Sita. The large Ramalingeshvara temple complex is situated in the northern part of the island, at a point where the land rises, overlooking a lake. It was founded during the Chola period and successively enlarged in the 17th-18th centuries in the Nayaka period. The temple is famous for its pillared corridors about 1220 meters in length and the imposing 54 metres high gopura, the entrance towered gateway.

On a clear day flight between Sri Lanka & India you can request the pilot to fly over the Ram Setu & they mostly tend to oblige. The coral thread is quite distinct. Tough to capture through a commercial flight window but very clear to see. Here, the Munnar, Sri Lanka end is below the wing ...