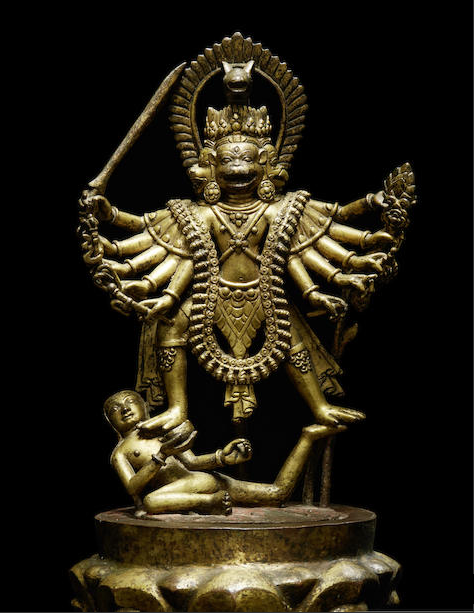 The shaft with a Nepali inscription translated, "On the 9th of the bright half of the month of Jyestha Nepal Samvat 822 [1702CE] King Bhupatindra Malla had [this sculpture] made for the occasion of the Siddhagni kotyahuti yagya."

Standing on a prone human and bearing the four additional faces of Narisimha, Garuda, Varaha, and Hayagriva, this tantric form of Hanuman appears to conflate the five most popular animal deities associated with Vishnu into one supreme cosmic being. The Malla kings of Nepal (1201-1796) chose Hanuman as their tutelary deity, featuring him on their banners and standards, which might explain the cylindrical pole fitting on which the figure stands. A closely related example, also commissioned by King Bhupatindra Malla of Bhaktapur (r.1696-1722), records its dedication to a temple in Bhatgaon in 1706.