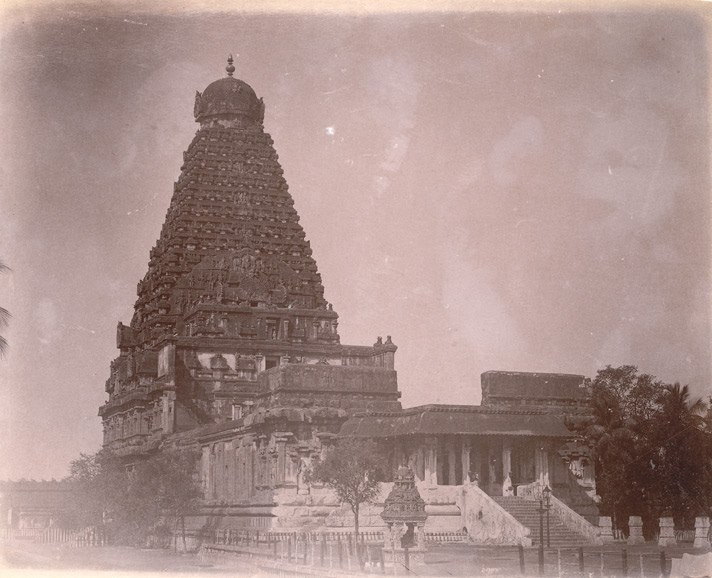 Digital Rare Book:
The Chola Temples of Thanjavur, Gangaikondacholapuram and Darasuram
By Calambur Sivaramamurti
Published by The Director General of Archaeology of India, New Delhi - 1960

Image:
General view of main sanctuary and tower, with mandapa in foreground, of the Brihadishvara Temple, Thanjavur - 1892

Photograph of the Brihadishvara Temple complex at Thanjavur from the Archaeological Survey of India Collections taken by Alexander Rea in c. 1892. Thanjavur was established and used by the Chola rulers in the 9th-12th centuries; it later became a Nayaka stronghold in the 16th-17th centuries and was also used by the Marathas in the 18th century. The Brihadishvara Temple was built in the 9th century and is one of the great achievements of the Chola era. This monumental temple stands in the middle of a large rectangular courtyard surrounded by smaller shrines. Its steeply pyramidal tower stands at about 66 m and consists of 13 storeys, each with pilastered walls covered with carved figures of divinities. This photograph is of the main tower of the temple with the mandapa (columned hall) in the foreground.

Brihadeswar Raja Rajeswara Temple and Peruvudayar Temple. It is one of the largest temples in India and is an example of Dravidian architecture during the Chola period. Built by Raja Raja Chola I and completed in 1010 CE, the temple turned 1000 years old - Raja Raja Chola I

It's awesome temple in Thanjavur.....It was under the Maratha Empire..