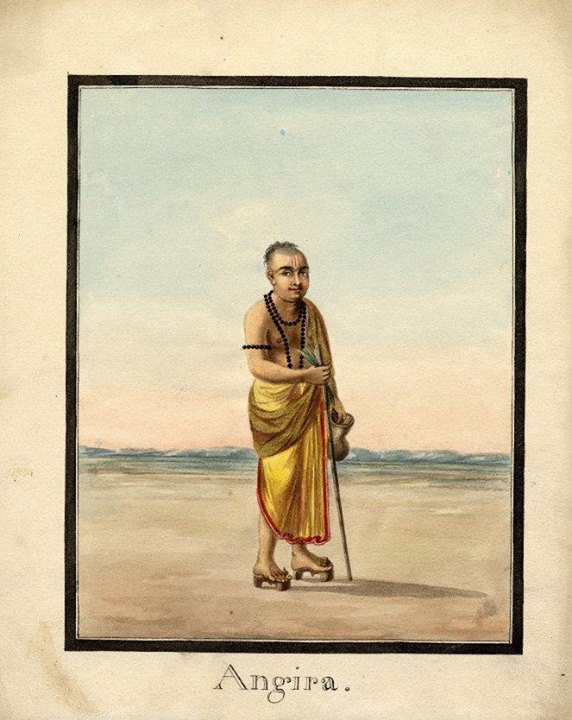 Watercolour painting on paper of Angiras, a Vedic Rishi. He is shown wearing a yellow dhoti with matching shawl draped over his shoulder. He wears wooden sandals on his feet and has two strings of beads around his neck. He holds a walking stick in his right hand and a bunch of grass. In his left hand he holds an earthenware pot. His head is shaven except for a patch at the back of his head and he has a naman (emblem) on his forehead. The painting is surrounded by a black border.

angira muni is a rather significant character, historically and sacredotally. he features in two religions that are generally thought of as separate. in truth, zoroastrianism and the vedic religion are sister religions. the the hindus worship the devas and regard the asuras as demons, while the zoroastrians venerate the asura (ahura, in avestan. there is a replacement of s with h - the same mechanism led to the name hindu to be derived from sindhu), and they also consider the daevas as demons. thus, these religions obviously are simply the sister religions of deva worshippers and asura worshippers. in the early texts of both creeds, the daevas and asuras have not attained mutually demonic status yet. but in later texts, the zoroastrians begin regarding daevas as demonic. similarly in the oldest veda, rgveda, asura divinities like varun are freely worshiped. but in later texts like mahabharata, the asuras have attained proper demonic status. the indic texts do declare that the devas and the asuras were brothers once, and then they later fell out with each other. the demonic deity angra mainyu is mentioned in zoroastrian sacred lore- "...In Vendidad 19.1 and 19.43-44, Angra Mainyu is the daevanam daevo, "daeva of daevas" or chief of the daevas..." angira muni was the preceptor of the devas, in indic sacred lore - the head priest, who represented the entire theogony of the deva-worshippers. thus, he would qualify for the position of the arch-nemesis of the rival religion of zoroastrianism. hence the equation of angra mainyu with the head of the devas indicates quite clearly that angira muni is the same angra mainyu referred to in zoroastrianism. (it is well known to historians/theologians that indra is mentioned in zoroastrianism, as are sarva and nasatya, both vedic deities). ( the rival religion of deva worship was eliminated from persia by the zoroastrian king xerxes-I in the 5th century. he even boasts about eliminating daiva worship from his realms in his inscriptions). centuries later the zoroastrian community sought refuge in india, and were freely granted asylum among the daiva worshippers. a rather unique example of peaceful coexistence between two rival religions that consider each other's divinities as demonic. https://en.wikipedia.org/wiki/Daeva