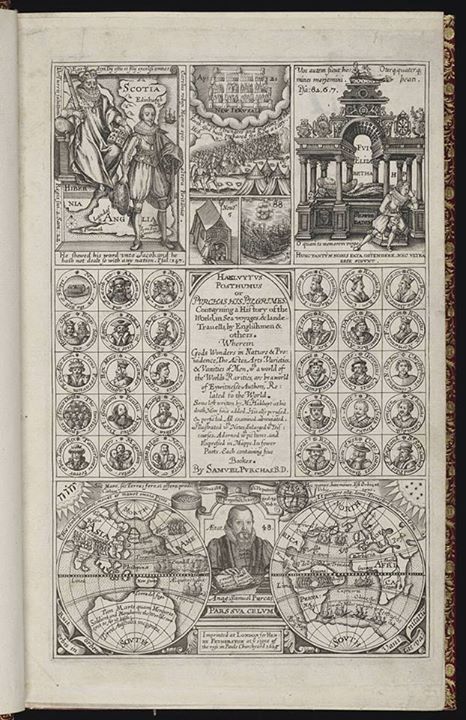 Digital Rare Book:
Hakluytus posthumus, or Purchas his Pilgrimes: contayning a history of the world in sea voyages and lande travells by Englishmen and others
By Samuel Purchase (1577?-1626)
Published by James MacLehose and Sons, Glasgow - 1905

In 1613 he published Purchas His Pilgrimage: or Relations of the World and the Religions observed in all Ages and Places discovered, from the Creation unto this Present. In this work, intended as an overview of the diversity of God's creation from an Anglican world-view, he presented several abbreviated travel stories he would later publish in full. The book achieved immediate popularity and went through four editions between 1613 and 1626, the year of Purchas's death.

In 1625 Purchas published Hakluytus Posthumus, or Purchas his Pilgrimes, a massive four-volume collection of travel stories that can be seen as a continuation of Richard Hakluyt's Principal Navigations and was partly based on manuscripts left by Hakluyt, who had died in 1616. Although the work is not methodically organized, it may be thematically divided into four volumes:

Volume I - explores ancient kings, beginning with Solomon, and records stories of circumnavigation around the African coast to the East Indies, China, and Japan.

Purchas his Pilgrimes became one of the sources of inspiration for the poem Kubla Khan by Samuel Taylor Coleridge. As a note to Coleridge's poem explains, "In the summer of the year 1797, the Author, then in ill health, had retired to a lonely farm-house between Porlock and Linton, on the Exmoor confines of Somerset and Devonshire. In consequence of a slight indisposition, an anodyne had been prescribed, from the effects of which he fell asleep in his chair at the moment that he was reading the following sentence, or words of the same substance, in Purchas's Pilgrimes: “In Xaindu did Cublai Can build a stately palace, encompassing sixteen miles of plaine ground with a wall, wherein are fertile meddowes, pleasant springs, delightful streams, and all sorts of beasts of chase and game, and in the middest thereof a sumptuous house of pleasure.”
- Wiki

Image:
"Purchas His Pilgrimes," title page of the work by the British travel writer Samuel Purchas, printed by William Stansby at London, 1625. Courtesy of the Monroe Wakeman and Holman Loan Collection of the Pequot Library Association, on deposit in the Beinecke Rare Book and Manuscript Library, Yale University, New Haven, Connecticut.

Empire of the Great Mogul," drawn by *William Baffin* and engraved by Renold Elstrack. Baffin was the navigator on the ship 'Anne', on which Sir Thomas Roe traveled back to England after his embassy. This map, based on Roe's information, was apparently the earliest English map of North India.