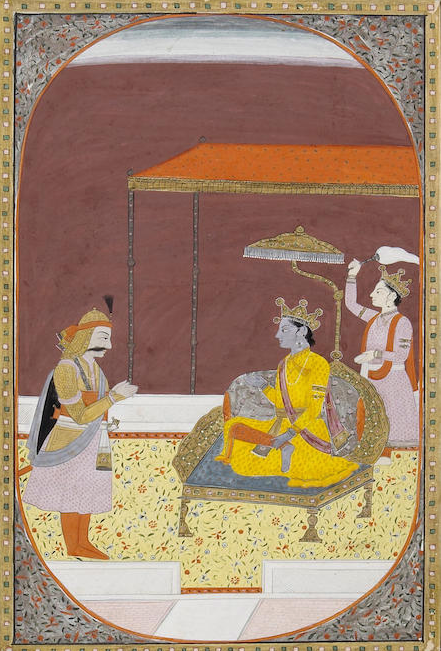 Classic epic texts like the Mahabharata, and those pertaining to the epic song and dance traditions, like the Natya Shastra, are explored at length in this essay.

There is a brief meditation on the relevance of the epic tradition in contemporary times and its reshaping by technology and globalisation in the future.

The original material of the epic texts is in Sanskrit, but there are also versions in the modern Indian languages. The performance may consist of the singing of the verses from the Sanskrit or other language text along with the discourse in the local language.

The chief epic metre of Sanskrit poetry is the shloka. It consists of four quarters of eight syllables each. The shloka is really the same as the anushtubh of the Vedic songs which, in turn, is the same as the gayatri with a fourth line added. Other metres include the trishtubh and indravajra (Indra’s thunderbolt) (11x4), indravamsha (Indra’s family) (12x4), vasantatilaka (the ornament of spring) (14x4), malini (the girl wearing a garland) (15x4), prithvi (the earth) (17x4), mandakranta (the slow-stepper) and harini (the doe) (17x4), shardula-vikridita (the tiger’s sport) (19x4), and the sragdhara (the girl with a garland) (21x4).

Another popular metre is the arya (the lady). It is divided into feet, each containing four instants, counting a prosodically short syllable as one and a long syllable as two instants. The first quarter of the arya stanza contains three such feet; the second, four and a half; the third, three; and the fourth, three and a half, with an extra short syllable after the second foot.

Of the two great epics, the Mahabharata is the longer one. Consisting of 1,00,000 verses, usually in the shloka metre, it is the world’s longest poem. According to the tradition, it was composed originally by Veda Vyasa as a smaller composition called Jaya, which was 8,800 verses long. He then taught to his pupil Vaishampayana another version that was 24,000 verses long. The final version of 1,00,000 verses emerged much later, thanks to the contributions of Lomaharshana, his son Ugrashrava and others. It was recited in public for the first time in the court of King Janamejaya, the great grandson of Arjuna, one of the heroes of the epic. The story is about intrigue and struggle between two families of cousins, the Kauravas and the Pandavas, which ends in a catastrophic war and the annhilation of the Kauravas. The Pandavas are five brothers married to the mercurial and beautiful Draupadi and befriended by Krishna, the avatara of Vishnu. According to the astronomical tradition, the war took place in 3137 BC whereas the Puranic tradition places it in 1924 BC.

The other great epic, the Ramayana, is a little longer than one-fourth of the Mahabharata. The traditional author of the Ramayana is the sage Valmiki. The story is about Rama, the perfect man, another avatara of Vishnu, who is exiled to the forest for 14 years together with his wife, Sita. When Sita is abducted by the asura-king Ravana, Rama assembles an army and invades Sri Lanka with the help of the flying hero Hanuman. In the end, Ravana is killed, and Rama and Sita return to their kingdom in Ayodhya. In Puranic genealogies, Rama comes before Krishna, and the Rama story is also summarised in the Mahabharata. By traditional accounts, Krishna lived about 5,100 years ago.

Apparently, both the epics suffered interpolations and additions, but now critical editions have been prepared. In addition, there are many versions in several languages of India and Southeast Asia. Of the many reworkings of the Ramayana, perhaps the most widely known is Tulasidasa’s Ramacharitamanas (Prasad, 1988), which is also the national scripture of the Indo-Caribbean world.

Gilt and gouache on paper; depicting Balarama in attendance on Krishna seated on an elaborate throne while receiving the hero Arjuna standing to the front in a gesture of veneration, all within an oval frame-like border and narrow geometric-patterned gilt edge band.