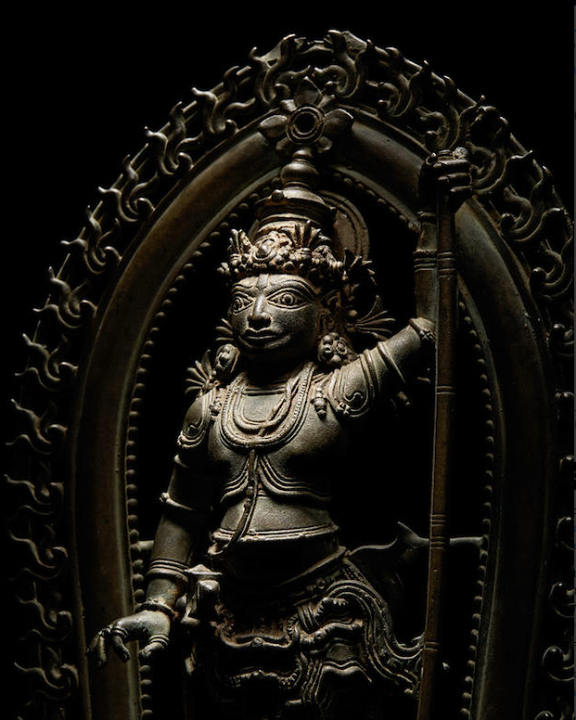 Cast with the high ornamentation and expressive vitality of the Kerala style, this engaging and accomplished bronze is a rare sculptural depiction of Rama, the hero of India's great epic.

His expression is one of limitless vigor and ability as he balances the great bow with which he struck down Ravana's armies and restored harmony to the universe. Meanwhile, his downturned right hand is articulated with consummate precision, cast in the act of gripping an arrow, now lost. Cascading from his belt hang a complex weave of exuberant ornamentation, which typifies Kerala sculpture. Still, unlike other examples, Rama is not encumbered by it. His broad figure and hieratic pose evoke a strength that can bear the heavy royal regalia effortlessly.

In discussing this bronze, Dr. Pal suggests that Rama's physique may have been modeled after the great 11th-century Chera ruler Maravarman Kulashekhara who conquered much of Tamil South India. "One could well imagine his identification with the hero of the epic." (ibid.) Certainly, there seems to be a deliberate attempt by the Cheras of modern day Kerala to distinguish a style from the Cholas of Tamil Nadu. He describes the bronze's aureole as, "an impressive example of delicate modeling and casting which further enhances the majesty of the figure."

Pal admits that Kerala bronzes are among the most underappreciated and least studied schools of Indian art, and emphasizes that, "nowhere else on the subcontinent have the sculptors lavished so much energy and attention to ornamental elements of a bronze ensemble as have the unknown artists of Kerala." (ibid., p.119) He intuits that bronze and stone sculpture (as opposed to wood) must have begun in Kerala under the political hegemony of the Pallava dynasty, which ended in the 9th century. In addition, the lavish and flamboyant ornamentation indicates an artistic borrowing from the Hoysala style of the 12th-14th centuries.

Chera's in 14th century is not possible. As per new age historians the second Chera empire ended in 11th century and as per old historians, it ended in 7th century. Please correct thw description.

I had not appreciated a Chera bronze before this. Thank you for the post and Happy Ramnavmi!

wonderful & amazing too .his expression vigour not calm& coocontrolled as he is symboled.