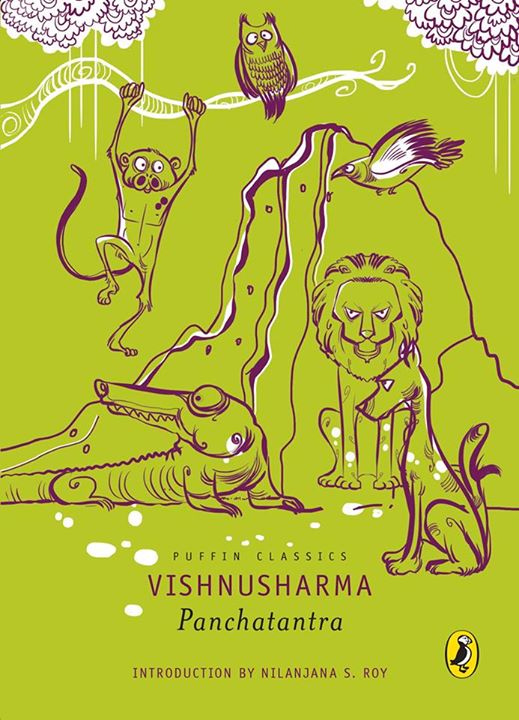 Evergreen animal fables, now in this classic keepsake edition
Composed in Sanskrit in around 300 ce, the Panchatantra is one of the oldest collections of fables in the world. Devised for the purposes of teaching three dull-witted sons of a king, it strives to convey the principles of kingship and some valuable life lessons. Relive the joy of this enduring classic through this magnificent translation from the original that illuminates the wise, pithy and unexpectedly witty tales like never before.

I looked at the Panchatantra again, with different eyes, and realised its true significance: not only was it a masterly treatise on politics and government and a manual for conducting our daily lives with wisdom and common sense, but devised to educate the three foolish sons of a king in the ways of the world, it was also a revolutionary, and successful, experiment in teaching young people. Where traditional methods had failed with the princes, the fables of the Panchatantra succeeded – by teaching them practical wisdom, and by awakening in them a curiosity about the world. Within six months, the blockhead princes had become wise and knowledgeable young men. Since then, says the Panchatantra, its stories have been used to educate young people everywhere, a claim that is borne out by the many translations and retellings of this work that are found all over the world, even today.

Storytelling is an ancient tradition in India, and stories, especially stories featuring animals that speak, think and behave like humans, have been used since time immemorial for the purposes of teaching and illustrating or explaining a point. Animal stories may be found in works as ancient as the Rig Veda, which, composed sometime between 1700 and 1100 BCE is one of India’s oldest texts, and in the Upanishads, composed only slightly later, in the first millennium BCE. One of the largest collections of such animal stories from ancient India is the Buddhist Jataka tales. These fables, composed sometime between 300 BCE and 400 CE, relate episodes from the Buddha’s previous lives (in many of which he was born as an animal) and were used to explain and propagate his teachings. The Panchatantra, composed in Sanskrit around 300 CE, continued this ancient tradition of using stories to fulfill the heavier and more serious purpose of teaching.

The appeal of the Panchatantra, however, is not limited only to the young. Apart from its wonderful stories and ageless wisdom, it is a work that looks at life head-on. Rather than seeking to present linear solutions where good wins over evil, moral behaviour wins over the immoral or even amoral, it acknowledges that life, love and friendship can be complex, that politics, government, human interactions are not always straightforward, and even right and wrong, truth and falsehood can often be a matter of circumstance, expediency, or what is practical. As a result, the stories resonate with people of all ages, at different levels, in different ways, everywhere. Today there may be found more than two hundred versions of the Panchatantra across the world, in more than fifty languages. The oldest recension is probably the Sanskrit Tantrakhyayika from Kashmir; this predates the Panchatantra version available to us today. The most famous retelling of the original work is the 13th century version by Narayana, known as the Hitopdesa.

Rohini Chowdhury is a widely published children’s writer and an established literary translator. As a children’s writer, she has more than twenty-five books and several short stories to her credit. Her published writing is in English and Hindi, and covers a wide spectrum of literary genres including novels, short fiction, and nonfiction. Her primary languages as a literary translator are pre-modern (Braj Bhasha and Avadhi) and modern (Khari Boli) Hindi, and English. Her translations include the seventeenth century Braj Bhasha text Ardhakathanak, widely regarded as the first autobiography in an Indian language, into modern Hindi and into English. Her literary interests include mythology, folklore, mathematics and history.

She runs a story website for children at www.longlongtimeago.com.

Rohini holds a PGDM from the Indian Institute of Management, Ahmedabad, and an Honours degree in Economics from Jadavpur University, Kolkata. She is widely travelled and brings in the nuances of the cultures of India, Africa and the West in her writings.

Panchatantra describes and illustrates, for the benefit of three ignorant princes, the central Hindu principles of nīti( Ethics).While nīti is hard to translate, it roughly means prudent worldly conduct, or “the wise conduct of life”. The Panchatantra discusses varied topics like philosophy, psychology, politics, music, astronomy, human relationship, etc., in a simple yet elegant style.

Frequently translated literary product of India", in many languages - the stories are among the most widely known in the world ------- 'Panchatantra' relief at the Mendut temple, Central Java, Indonesia.

Panchatantra - As early as the eleventh century this work reached Europe, and before 1600 it existed in Greek, Latin, Spanish, Italian, German, English, Old Slavonic, Czech, and perhaps other Slavonic languages. Its range has extended from Java to Iceland. A German translation, Das Buch der Beispiele, of the Panchatantra was printed in 1483, making this one of the earliest books to be printed by Gutenberg's press after the Bible. These early European versions were generally known as the fables of Bidpai or Pilpay. In France, the Second Fables of fabulist Jean de La Fontaine was based mostly on Pilpay. In India, at least 25 recensions have been traced, the oldest being the Tantrakhyayika recension of Kashmir, and the longest being the 1199 CE recension of the Jain monk, Purnabhadra. Other popular recensions are the Hitopadesha, and Book 10 of the famous Kathasaritsagara.

Actually panchatantra is a very nice book for kids...We read it in our childhood.......I think every parents should give the children ths book.....A lots of moral can be learnt through the book.......

Thought haksar had done one for penguin? Shd go with Hitopadesha.

Translation of books needs tough job. I appreciate the translator's nack to keep the material intact in its sense my spirit.

Vandana Singh See what we can have :)

While reading this seems just like I am in beautiful jungle