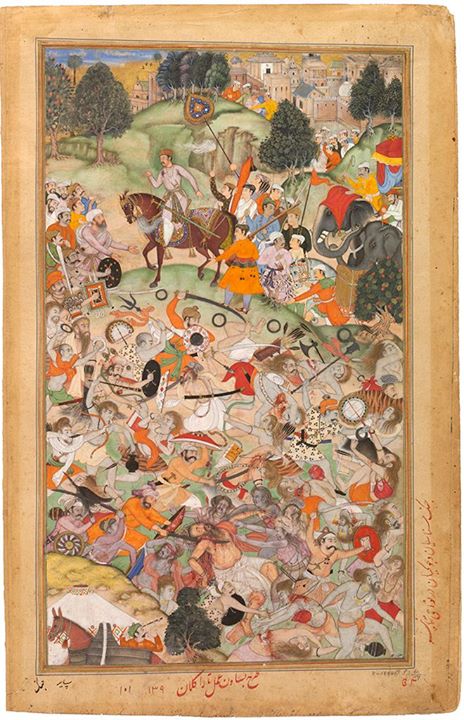 Battle of Thanesar, (also known as the Battle of the Ascetics) was fought during the summer in the year 1567, near Thanesar on the banks of the Sarsawati Ghaggar River in the state of Haryana. While the Mughal Emperor Akbar was on his campaign to subdue the renegade Rajputs, he set up camp at a water Qanat (sacred spring) and established camp around that fresh water reservoir in order to properly manage his forces in the nearby regions

After staying at the Qanat for weeks during the scorching summer heat, Akbar and the Mughals encountered a very large group of Sanyasis. The ascetics approached and entered the Mughal camp with complete disregard for the Mughal military standard and Red tents symbolizing the Emperor himself. Akbar was generally displeased at their arrival because he was gathering his armies, constructing morale and preparing for his next campaign against Udai Singh. However the main intentions of the Sanyasi group was to drink and bathe in the Qanat, which they considered "Holy".

As the summer afternoon began to scorch another group of Sanyasis arrived they began to gather in their hundreds and thousands around the Qanat. Outraged by their presence and intrude Abdul Hasan Asaf Khan advised the Mughal Emperor Akbar to take action. The Mughals were waiting for an opportunity to drive the priests out of their encampment, but Akbar believed that they would leave by sunset.

The Mughal Emperor Akbar, continued to concede the Qanat to the Sanyasis and carefully observed their actions. As the "first" large group of priests bathed and drank from the Qanat, a "second" group of priests also began to arrive in their hundreds. It was due to the arrival of the second group that tensions ignited among the two large groups, that eventually culminated in a brawl inside the Qanat and almost immediately the two rival groups of Sanyasis began to stab each other using Kitars.

Concerned that the violence might spread into the Mughal encampment, the Mughal Emperor Akbar ordered almost 250 of his men to immediately retake the Qanat from the schismatic priests. The Mughals armed with Talwars, piked-shields, Matchlocks and Composite Bows and Arrows, ferociously overwhelmed the ranks of priests ultimately driving them away from the Qanat according to their jurisdiction, which justified the usage of force.

some of the sanyasi cults were armed. Subrataji,I would requestyou to please usethe word Baghva instead of Saffron.Saffrom {kesariya}was worned by the rajpur soldiers in the last fight in which they gave up ther lives.Thank you

Doesn't seem the more powerful group to be sannyssis, though they are in saffron attire. Their leader however is not wearing saffron.

According to Abul Fazl (via Vincent Smith) the two sadhu groups were the Kurs and the Puris. The fight was over collecting alms/taxes from pilgrims.

Never seen large sects of sanyyasis fight when crores gather be it Kumbh or elsewhere. I am sure this is fiction created to justify Mughal attack on Sanyyasis,aka, sanitisation of history.