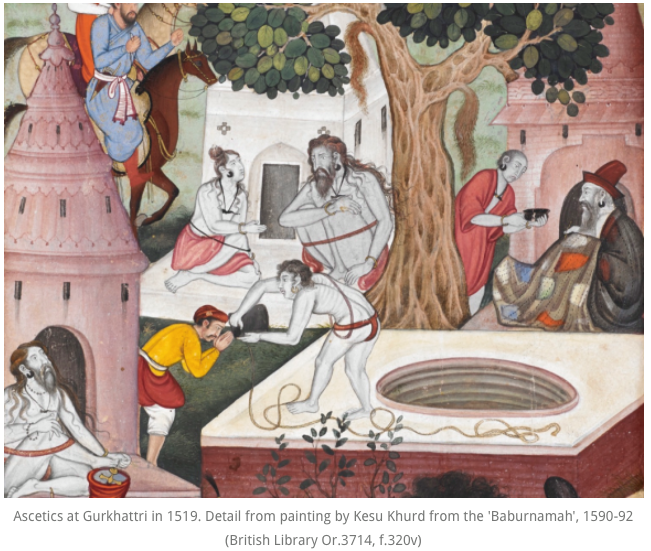 Essay:
How ascetics and yogis were depicted in Indian paintings from the Mughal era.
By J.P.Losty
Published in Scroll.in

A look at illustrated historical manuscripts and Deccani paintings from the British Library.

Being invited to give a series of three lectures on this wide-ranging topic at a seminar at the Universita di Ca’ Foscari in Venice in July 2016, I thought this was a good opportunity to write a blog highlighting the interesting material in the British Library. Here are discussed such images in Mughal and Deccani painting.

Yogis and other types of ascetics are found in Mughal illustrated historical manuscripts showing encounters recorded in Mughal histories between the emperors Babur, Akbar and Jahangir; and also in individual album paintings. From the Mughal point of view, more or less all Hindu ascetics were classed as yogis, since they all practiced bodily asceticisms of some kind or another.

The Mughal concern with naturalism towards the end of Akbar's reign to some degree accounts for what appears to be the accuracy of the early Mughal images of ascetics and yogis. Early Mughal pictorial representations of yogis have, as Jim Mallinson points out (Mallinson, Yogis in Mughal India) enormous value as historical documents on account of the accuracy and consistency of their detail, overwriting in many instances what can be gleaned from the conflicting literary traditions.

It is obvious, he writes, that a variety of traditions shared ascetic archetypes and freely exchanged doctrines and practices.

The earliest textual descriptions of yogic techniques date to the last few centuries BCE and show their practitioners to have been ascetics who had turned their backs on ordinary society.1 These renouncers have been considered practitioners of yoga par excellence throughout Indian history. While ascetics, including some seated in meditative yoga postures,2 have been represented in Indian statuary3 since that early period, the first detailed depictions of Indian ascetics are not found until circa 1560 in paintings produced under the patronage of Mughal Emperor Akbar (reigned 1556–1605) and his successors.4 These wonderfully naturalistic and precise images illuminate not only Mughal manuscripts5 and albums but also our understanding of the history of yogis6 and their sects. Scholars have argued for these paintings’ value as historical documents;7 their usefulness in establishing the history of Indian ascetic orders bears this out. The consistency of their depictions and the astonishing detail they reveal allow us to flesh out—and, sometimes, rewrite—the incomplete and partisan history that can be surmised from Sanskrit and vernacular texts, travelers’ reports, hagiography, and ethnography.8

Neha this reminded me of your stoned yogi miniature:)