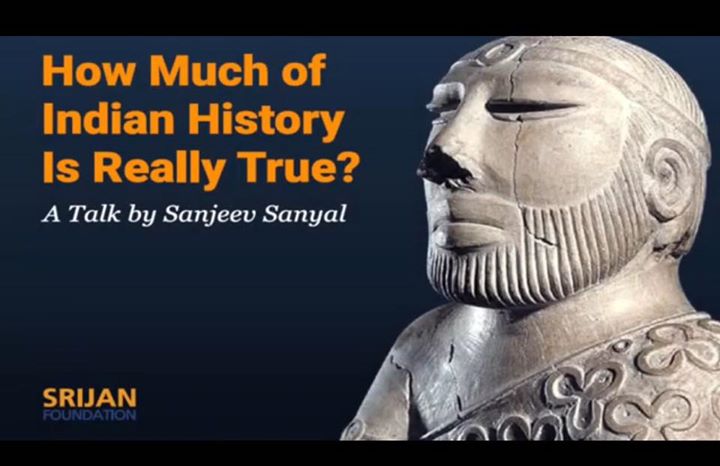 How Much of Indian History Is Really True?
by Sanjeev Sanyal
Srijan Foundation

Sanjeev Sanyal believes that every generation needs to rethink and question the paradigms on which a society is based. Here is a peek into what to expect from this talk. During this talk, Sanjeev would help us realize the importance of separating the hard evidence from their interpretations in our history books, leading to more critical thinking on part of the reader.

Sanjeev is an Indian writer, environmentalist and urbanist, who is considered as one of the world's leading financial sector economists. Sanjeev was the Global Strategist and Managing Director at Deutsche Bank till Oct 2015. He is also the author of three best-selling books, including the "Land of the Seven Rivers: A Brief History of India's Geography."

Wrong and rights ,who decides first? It was by vikramadithya of Ujjain who built iron pillar year 57BC after defeating meluchas off Arabia, who was also famous for reviving hindh dhrama ,that time Buddhism was its peek stages,his period 100bc 014ad), but wrongly given credit (iron pillar)to Chandra Gupta of mourya(1500bc) Gupta's period 300bc ,same time samudraguptha alias sundra kuttas met magasthanees. Nandas of magadha(1600-1507 BC) Chandragupta mourya(1507to 1479bc) Chandra Gupta (Gupta) 400bc to 300bc Mourya Ashokdithya period (1479 -1443) Samudra Gupta alias Ashokdithya gupta /devanpriya sundra kuttas period 321bc to 270bc) Buddha 80 years (1894 bc to 1814bc ),same time shishunag dynasty king bimbasar ruling (1859 to 1821)one more king bindusar of mourya dynasty rule was between 1507 BC to 1479bc ,here historian confused between two names, shishunag dynasty Ajathshantu rule was witnessed by Buddha ,that time Buddha crossing 72age ( ajathshatnu period 1821bcTo 1790bc) Shankar achrya born 509bc but unfortunately they taken abhinava shankar as shankrachrya(500ad) Varahamihira was students of aryabhata born before 2000bc ,same time vikramadithyas so called navarthana vararuchi was contemporary of panthanjali born before 500bc who witnessed meluchas attacks in magadha empire ,dhanvanthri nothing do with Vikram's of nine gems,born during the time of samudra mathan 6000bc. Almost 1000 (1500bc 500bc)year's history of Indian completely removed or destroyed by historian to impress whom? Victory Queen, Karl Mark, Mao,....Maoist, Just like how we reads about freedom mooment India as sindhyas ,Mysore ,peshweys as freedom fighter's even though they close aid of east India co!!! Indian history directly connected with astrological fact's and figures, without consulting those figures, looks like fiction only. As for as my knowledge astrological books directly connected with Indian history, if u ignore those u will end up with writing Indian fiction only instead of Indian history

I liked his @Land of the Seven Rivers: A Brief History of India's Geography he sounded unbiased in those but as you reach his Ocean of the Churn you could clearly see his agenda shifting between the lines and obviously you could sense what has changed throughout these years and I wonder whether the Principal economic adviser post has anything to do with it :/