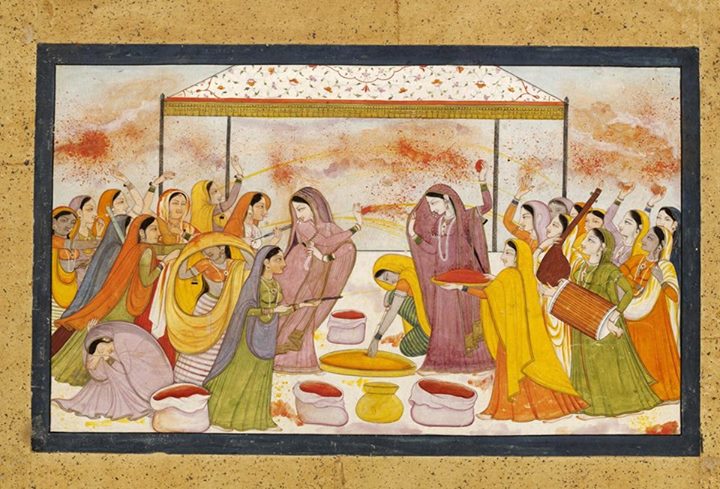 Essay:
Exploring the history of Hindu festivals: the ancient strands of HolÄkÄ
By By Manasatarangini T
Published in Indiafacts.org

In Hindu tradition there is a clear demarcation of at least three distinct classes of ritual observances: 1) The most conservative of these are the Å›rauta rituals that deviate little from their Vedic prototype specified in the texts known as the brahmaá¹‡a-s and Å›rauta sÅ«tra-s. 2) The next are the gá¹›hya or domestic rituals, which are associated with the major events in an individualâ€™s life such as birth, naming, studentship, marriage, setting up of a household, and death. These show a conservative core going back to the earliest Vedic age or earlier, specified in texts known as the gá¹›hya sÅ«tra-s, along with later accretions coming from texts known as the purÄá¹‡a-s, local customs and sectarian traditions. 3) Finally, we have the festive observances, which are followed by the whole of Hindu society including the lay people. Examples of these include Indradhvaja, DÄ«pÄvalÄ«, HolÄkÄ (commonly called Holi in Northern parts of India) and vasanta-paÃ±camÄ«.

Of the three, the Å›rauta rituals are practiced by very few people today and are largely unknown to the modern lay Hindus even though the foundations of their dharma lie in these rituals. The gá¹›hya traditions are somewhat more widely known, though they too are declining among the Hindus of urban India. In contrast, the festive observances are still widely known and practiced. However, unlike the Å›rauta and gá¹›hya rituals the festive observances are much less tethered to the canonical texts and are greatly prone to local variations. Indeed, this distinction is clearly recognized by the great theorists of ritual in Hindu tradition, i.e. the commentators of the mÄ«mÄá¹ƒsa system, who explicitly distinguish these festivals from the rituals ordained by the words of the Veda. Nevertheless, these festivals are likely to have been of great antiquity in the Indo-Aryan world because at least some of them correspond to festivals of comparable intent observed elsewhere in the Indo-European world. The earliest references to these festivals are seen in the sÅ«tra-s of the 18th pariÅ›iá¹£á¹­ha of the Atharvaveda (the Utsava-sÅ«trÄá¹‡i), which provides a list of such observances that are to be supported by the state.

We believe it is important that the history of these rituals be closely studied as it provides clues to understand our past and the role they played in the well-being of the people. Indeed, it was for this reason the great king Bhojadeva ParamÄra paid great attention to their description and observance. Two centuries later these observances were studied and described at length by the great encyclopedist HemÄdri in his Caturvarga-cintÄmaá¹‡i. Unfortunately, the loss of Hindu power to Islam and Christianity resulted in the memory of the old practices being forgotten to a great degree. In our times the systematic study of the early lay or social observances of BhÄrata was done by the great Sanskritist V. Raghavan. His work was published with assistance of his successor S.Janaki because of his death before it saw print. Our intention here is to merely revive the study of these observances with an examination of the early history of HolÄkÄ. We must stress what we present here is largely indebted to Raghavanâ€™s work along with some additional observations.

PÅ«tanÄ was originally a fierce kaumÄra goddess who was completely demonized in the vaiá¹£á¹‡ava narrative.

The earliest mention of HolÄkÄ is in the 18th pariÅ›iá¹£á¹­ha of the Atharvaveda in the form a brief sÅ«tra:

Now on the night of the phÄlguni full moon is HolÄkÄ.

This continues to be its date of observance to the current day. The verse of the GÄthasaptaÅ›ati of the Andhra king HÄla refers to getting â€œdirtyâ€ in the phÄlguá¹‡i festival:

In the phÄlguá¹‡i festival someone innocently colored you by throwing dust,

Why are you trying to wash that away, when it has been washed, by the sweat flowing off the nipples of your pitcher-like breasts?

Look! Sitting in the shadow of the lotus which is her face,

dusted by the powder thrown up as she grinds for the festival,

are her two fair breasts sitting like a pair of royal swans.

Not unexpectedly, such frolicking in the festival could have negative consequences. Indeed, a MahÄrÄá¹£á¹­rÄ« PrÄká¹›ta gÄtha attributed to the same work of the Andhra monarch preserved only in the Telugu country sarcastically states:

With breasts colored by the festivalâ€™s powder,

with a lotus as ornament and mango shoot behind the ear,

you are, girl, a real honor to our village!

Thus, one may say that by the beginning of the common era when the Andhra-s held sway, the key elements which define HolÄkÄ were already in place: the color play and the drunken revelry. These are mentioned in authoritative medieval digests on festivals which collect material from earlier texts. For instance, the Vará¹£aká¹›tyÄ-dÄ«pikÄ says that the people smear themselves with ashes from a bonfire (see below) and color powders and prance about like piÅ›Äca-s on the streets (grÄma-mÄrge krÄ«á¸itavyaá¹ƒ piÅ›Äcavat).These are features of the festival that persist to the current day.

True we have lost the true essence of our rituals which are deeply scientific. Only the revelry is left which was further demonised by the coming if islam and christianity

It is belived that she profounded 3 mantras of Rudrayamal , associated with Manipur Chakra

Nice... Thanks for sharing

Link to the book please

What the heck is this 'aryan' nonsense ?