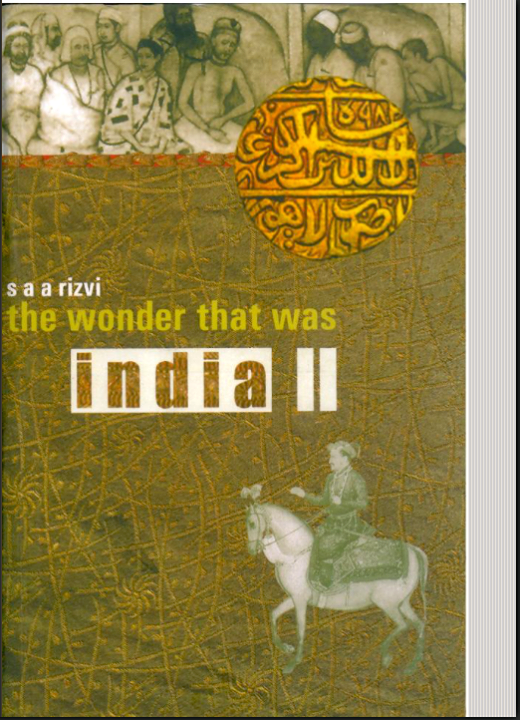 New Book:
The Wonder That Was India
A survey of the history and culture of the Indian sub-continent from the coming of the Muslims to the British conquest 1200-1700 AD
By Syed Athar Abbas Rizvi
First published by Sidgwick & Jackson, London - 1987
Volume 2

India and China have the oldest cultural traditions in the world. India has enjoyed over 4,000 years of civilization, and every period of its history has contributed something to present-day life. The most significant characteristic of Indian civilization, as it evolved through the ages, is its unity in diversity. The Wonder That Was India, first published in 1954, now called Volume I, deals with the ancient civilization of India. It was stated there that the ancient civilization of India differed from those of Egypt, Mesopotamia, and Greece in that its traditions have been preserved without a break to the present day.* Muslim rule in India, which was firmly established in the thirteenth century and flourished until the beginning of the eighteenth century, and is now the subject of the present volume, did not destroy the ancient culture of India, as did the onslaughts of the Muslims in Persia.

Under the rule of some of the Delhi sultans of the Middle Ages there was persecution, and we read of temples being razed to the ground and brahmans put to death for practising their devotions in public; but in general the Muslims were reasonably tolerant, and at all times Hindu chiefs continued to rule in outlying parts of India, paying tribute to their Muslim overlords. Conversions to Islam were numerous, though only in a few regions were the majority of Indians persuaded to embrace the new faith. Hindus in those parts of India dominated by Muslims often accepted the situation as normal. In such conditions mutual influence was inevitable. Hindus began to learn Persian, the official language of their Muslim rulers, and Persian words found their way into the vernaculars. Well-to-do Hindu families often adopted the system of 'strict parda' from the Muslims, and made their womenfolk veil their faces in public. The surviving Hindu kings borrowed new military techniques from the Muslims, learnt to employ cavalry with greater effect, and to use heavier armour and new types of weapon. One great religious teacher of medieval India, Kabir (1425-1505), a poor weaver of Banaras, taught the brother-hood of Hindu and Muslim alike in the fatherhood of God, and opposed idolatry and caste practices, declaring that God was equally to be found in temple and mosque. Later, Nanak (1469-1539), a teacher of the Panjab, taught the same doctrine with even greater force, and founded a new faith, that of the Sikhs, designed to incorporate all that was best of both Hinduism and Islam.

Nevertheless, the Muslim invasions, and the enforced contact with new ideas, did not have the fertilizing effect upon Hindu culture which might have been expected. Hinduism was already very conservative when the lieutenants of Muhammad of Ghur conquered the Ganges Valley. In the Middle Ages, for every tolerant and progressive teacher there must have been hundreds of orthodox brahmans, who looked upon themselves as the preservers of the immemorial Aryan Dharma against the barbarians who overran the holy land of Bharatavarsa. Under their influence the complex rules of the Hindu way of life became if anything stricter and more rigidly applied.
In the sixteenth and seventeenth centuries the Mughal emperors unified practically the whole of North India and much of the Deccan, and built up an empire such as had not been seen since the days of the Guptas. The Mughal period was one of great splendour, which has left its mark on India in the form of many lovely buildings, wherein Islamic and Hindu motifs often blended in a perfect unity. The Taj Mahal at Agra, the Mughal capital, is of course the most famous memorial of the times. Akbar (1556-1605), the contemporary of Queen Elizabeth I and the first of the four great Mughal emperors, fully realised that the Empire could stand only on a basis of complete toleration. All religious tests and disabilities were abolished, including the hated poll-tax on unbelievers. Rajput princes and other Hindus were given high offices of state, without conversion to Islam, and inter-communal marriages were encouraged by the example at the Emperor himself. If the policy of the greatest of India's Muslim rulers had been continued by his successors, her history might have been very different.

please! please! provide the link of his other book on sufism."A History Of Sufism In India".

Good book,must for every indian

"Hinduism was already very conservative when the lieutenants of Muhammad of Ghur conquered the Ganges Valley. In the Middle Ages, for every tolerant and progressive teacher there must have been hundreds of orthodox brahmans, who looked upon themselves as the preservers of the immemorial Aryan Dharma against the barbarians who overran the holy land of Bharatavarsa. Under their influence the complex rules of the Hindu way of life became if anything stricter and more rigidly applied." Any proof?, or it "must have" been so?