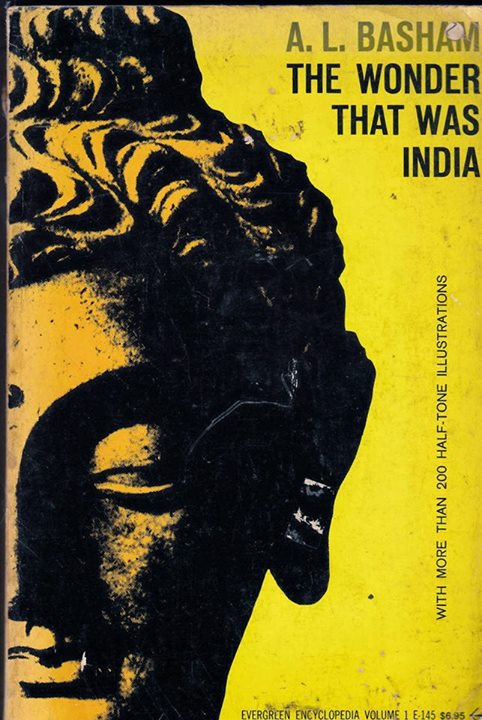 Digital Rare Book:
The Wonder That Was India
A survey of the Indian history and culture of Indian sub-continent before the coming of Muslims
By Arthur Llewellyn Basham
Published by Pan Macmillan
First published in 1954, London
Volume 1

The Wonder That Was India: A Survey of the Culture of the Indian Sub-Continent Before the Coming of the Muslims, is a book on Indian history written by Arthur Llewellyn Basham and first published in 1954. The book was aimed at a western audience. Basham, in the book, has attempted to correct the negative stereotypes of India created by authors like James Mill, Thomas Babington Macaulay and Vincent Arthur Smith.

This is a classic that anybody with an interest in the civilisational beginnings of India must read. This is a work of uncompromising scholarship and a labour of love. When it was first published in the United Kingdom in 1954, it became an instant hit, as it would in the United States a few years later. Since then it has consistently found an avid readership all over the world, been translated into many languages, and has educated and entertained generations of general readers, serious students and travellers to India.

Summary :
Indian civilization is among the oldest in the world, and what is unique in that respect is that the culture of the peoples still remains largely unchanged, with a strong thread of continuity through the ages.

The author also discusses the Aryan invasion theory (a theory which has since been debunked) supporting it with various research papers and findings of that time. The evolution of Hindu religion is also talked about in this bookâ€”from the Harappan times, to the coming of the Aryans and the mutual influence that Hinduism and its off shoots Jainism and Buddhism had on each other.

This book is comprehensive in its coverage of Indian history. It looks at every aspect of Indian society and culture. The Wonder That was India covers everything from religion, governance, social evolution, literary traditions, philosophy languages, and science.

The author explores the significant role the Hindu religion played on the lives of the people. All the literary compositions of ancient times had religious associations. He also puts forward the theory that the European gypsies are of Indian origin.

The Wonder That Was India also gives an insight into modern Indian society and culture, how it became a confluence of different influences from many a quarter throughout the many stages of its history.

About the Author:
Arthur Llewellyn Basham was an Indologist and a professor at Londonâ€™s School of Oriental and African Studies.

Basham wrote many books on India, including A Cultural History of India and The Sharqi Sultanate Of Jaunpur. He also co-authored The Origins and Development of Classical Hinduism, Religious Beliefs and Practices of North India During the Early Medieval Period, and History and Doctrines of the Ajivikas:A Vanished Indian Religion. But his most popular work is the book The Wonder That Was India.

The author was born in 1914 in Essex. His father had served in the Indian Army and told him a lot of stories about India that sparked an interest in him about the country. Basham was interested in studying various religions, from Christianity to Hinduism, Buddhism, and Islam. The author obtained a degree in Sanskrit from the School of Oriental and African Studies. He served in the Civil Defence department during the Second World War. After the war, he did a doctorate at the School of Oriental and African studies and later became a Professor at that college. In 1965, Basham left SOAS to join the Australia National University, where he became the Head of the History Department and also Professor of Oriental Civilizations

WRITTEN for a Western audience in 1954 at a time when the sun had set on the British Empire, A.L. Basham's The Wonder that was India is among the "must reads" for every undergraduate pursuing history in India. And, herein lies the greatest testimony to the fact that this book had successfully "decolonised" Indian history. Picador India celebrates the golden jubilee of The Wonder with a reissue of its third edition published 12 years after the book first came out. For those familiar with the book, the only new addition is the foreword by Basham's student, Thomas R. Trautmann â€” a professor at the University of Michigan â€” in which he explains the context in which The Wonder was written. Part of a series on ancient civilisations â€” the other titles being The Glory that was Greece, The Grandeur that was Rome, The Splendour that was Egypt and The Greatness that was Babylon â€” The Wonder was Basham's effort to correct the negative stereotypes of India perpetuated by the writings of James Mill, Macaulay and Vincent Smith â€” whose Early History of India had become a standard in Indian schools and universities. Translated into a dozen languages including Spanish, Russian, Polish and Croat, The Wonder, along with nationalist historian, R.C. Majumdar's multi-volume History and Culture of the Indian People sought to replace the imperial histories of India. According to Trautmann, "Basham and Majumdar, moving toward one another from different directions" were a counter to the hegemonic texts that claimed "Indians were never so happy as when they were held in good order under the rule of a firm but benevolent empire such as that of the Mauryas, the Guptas, the Mughals or the British". - The Hindu

Thanks for sharing! However just want to call out that "Aryan invasion theory" has been since debunked . http://www.dnaindia.com/india/report-new-research-debunks-aryan-invasion-theory-1623744

One should edit the book . And delete #AIT

Really a wonderful book. I am proud possessor of a paper back edition of the book with autograph of of the author, the great A.L.Basham.

Good book for the student to know the Indian secular multi layer socio cultural history of India by the liberal A.L.Basam

An excellent book on ancient Indian history... must for every students

However, this book is cursed with western mindset of superiority. But still worth reading. Reader must use his brain.

The book is a really wonderful one and I request each and every one to read the book.

awesome book.This is like an encyclopedia for history students

Very good book, must for every indian

A wonder book.. must in the library

Thanks for sharing... Really a wonderful book..

a wonderful book. ..it was a part of my UG course in college

Haha . This book begins with AIT.

Manish Pratap Singh must have pdf

The last chapter ( probably) describes what the world owes to India. It is not exactly a rare book in the sense of availability. The second vol on the muslim period is written by Rizvi

Friends, I am not a student of the history, but I read a section related to the Buddhist Art in his book, while I was preparing a paper on Bodhisattva Avalokiteshvara. Basham 's interpretation of Buddhist Art profoundly impressed me.

A pile of crap. You lot should be ashamed of yourselves. Yet another horde of Hindu-hating intellectuals.

GREAT AND FANTASTIC WORK AND COLLECTION OF THE TREASURE TROVE OF BOOKS, KEEP IT UP