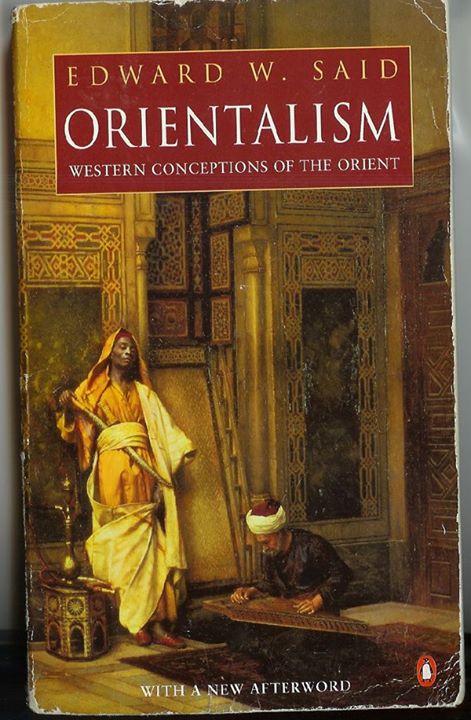 Edward Wadie Said (1 November 1935 â€“ 25 September 2003) was a professor of literature at Columbia University, a public intellectual, and a founder of the academic field of postcolonial studies. A Palestinian American born in Mandatory Palestine, he was a citizen of the United States by way of his father, a U.S. Army veteran.

As a cultural critic, Said is known for the book Orientalism (1978), a critique of the cultural representations that are the bases of Orientalismâ€”how the Western world perceives the Orient. Saidâ€™s model of textual analysis transformed the academic discourse of researchers in literary theory, literary criticism, and Middle Eastern studiesâ€”how academics examine, describe, and define the cultures being studied. As a foundational text, Orientalism was controversial among the scholars of Oriental Studies, philosophy, and literature.

Said became an established cultural critic with the book Orientalism (1978) a critique (description and analyses) of Orientalism as the source of the false cultural representations with which the Western world perceives the Middle Eastâ€”the narratives of how The West sees The East. The thesis of Orientalism proposes the existence of a â€œsubtle and persistent Eurocentric prejudice against Araboâ€“Islamic peoples and their cultureâ€, which originates from Western cultureâ€™s long tradition of false, romanticized images of Asia, in general, and the Middle East, in particular. That such cultural representations have served, and continue to serve, as implicit justifications for the colonial and imperial ambitions of the European powers and of the U.S. Likewise, Said denounced the political and the cultural malpractices of the rÃ©gimes of the ruling Arab Ã©lites who have internalized the false and romanticized representations of Arabic culture that were created by Angloâ€“American Orientalists.

"So far as the United States seems to be concerned, it is only a slight overstatement to say that Moslems and Arabs are essentially seen as either oil suppliers or potential terrorists. Very little of the detail, the human density, the passion of Arabâ€“Moslem life has entered the awareness of even those people whose profession it is to report the Arab world. What we have, instead, is a series of crude, essentialized caricatures of the Islamic world, presented in such a way as to make that world vulnerable to military aggression."
â€” â€œIslam through Western Eyesâ€ (1980) The Nation.

Orientalism proposed that much Western study of Islamic civilization was political intellectualism, meant for the self-affirmation of European identity, rather than objective academic study; thus, the academic field of Oriental studies functioned as a practical method of cultural discrimination and imperialist dominationâ€”that is to say, the Western Orientalist knows more about the Orient than do the Orientals.

That the cultural representations of the Eastern world that Orientalism purveys are intellectually suspect, and cannot be accepted as faithful, true, and accurate representations of the peoples and things of the Orient; that the history of European colonial rule and political domination of Asian civilizations, distorts the writing of even the most knowledgeable, well-meaning, and culturally sympathetic Orientalist.

"I doubt if it is controversial, for example, to say that an Englishman in India, or Egypt, in the later nineteenth century, took an interest in those countries, which was never far from their status, in his mind, as British colonies. To say this may seem quite different from saying that all academic knowledge about India and Egypt is somehow tinged and impressed with, violated by, the gross political factâ€”and yet that is what I am saying in this study of Orientalism."
â€” Introduction, Orientalism, p. 11

That since Antiquity, Western Art has misrepresented the Orient with stereotypes; in the tragedy The Persians (472 BCE), by Aeschylus, the Greek protagonist falls, because he misperceived the true nature of The Orient. That the European political domination of Asia has biased even the most outwardly objective Western texts about The Orient, to a degree unrecognized by the Western scholars who appropriated for themselves the production of cultural knowledgeâ€”the academic work of studying, exploring, and interpreting the languages, histories, and peoples of Asia; therefore, Orientalist scholarship implies that the colonial subaltern (the colonised people) were incapable of thinking, acting, or speaking for themselves, thus are incapable of writing their own national histories. In such imperial circumstances, the Orientalist scholars of the West wrote the history of the Orientâ€”and so constructed the modern, cultural identities of Asiaâ€”from the perspective that the West is the cultural standard to emulate, the norm from which the â€œexotic and inscrutableâ€ Orientals deviate.

The thesis of Orientalism concluded that the Westâ€™s knowledge of the Orient depicts the cultures of the Eastern world as an irrational, weak, and feminized nonâ€“European Other, which is the opposite of the Westâ€™s representations of Western cultures as a rational, strong, and masculine polity. That such an artificial binary-relation originates from the European psychological need to create a â€œdifferenceâ€ of inequality, between the West and the East, which inequality originates from the immutable cultural essences innate to the peoples of the Oriental world.

The PDF book above ends on page 57 or so.