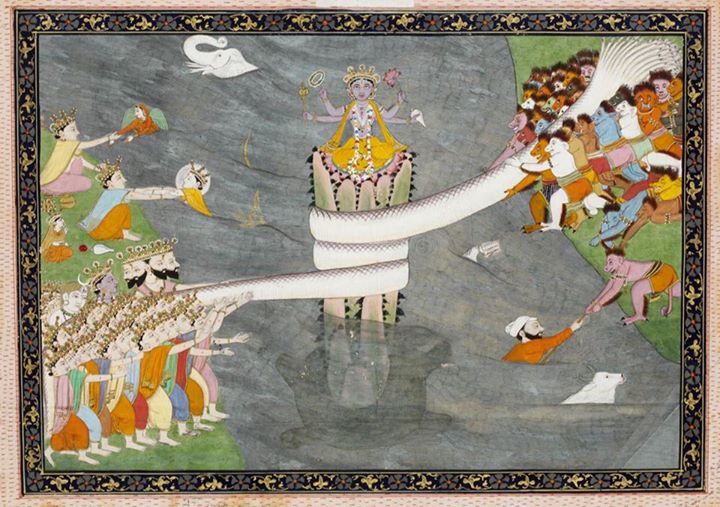 Digital Rare Book:
Cultural Data in the Kurma Purana
By Dr.Harinarayan Dubey and Lakshminarayana Tripathi
Published by University of Allahabad - 2002
In Hindi

Painting, in opaque watercolour on paper, depicting the tortoise (Kurma) incarnation of Vishnu; illustration to a Vishnu Avatara series. Vishnu stands in the centre, crowned, wearing yellow, with four arms holding the shell, the pink lotus, the disc and the mace. He sits on a pink lotus on the top of Mount Mandara, whose base rests upon the giant tortoise, shadowy beneath the grey and gold surface of the Ocean of Milk. The churning-rope is the great white serpent Vasuki, coiled, with his heads and tail pulled alternately by crowds of demons and devi (demi-gods), who stand on the green shores. Fourteen ratnas (treasures) are seen in the waves.

Many thanks for sharing Kurma Purana :)

Kurma Avatar of Vishnu, below Mount Mandara, with Vasuki wrapped around it, during Samudra manthan, the churning of the ocean of m

I have never had a chance to read Kurma Purana. Thank you for sharing this book and giving me a rare opportunity.