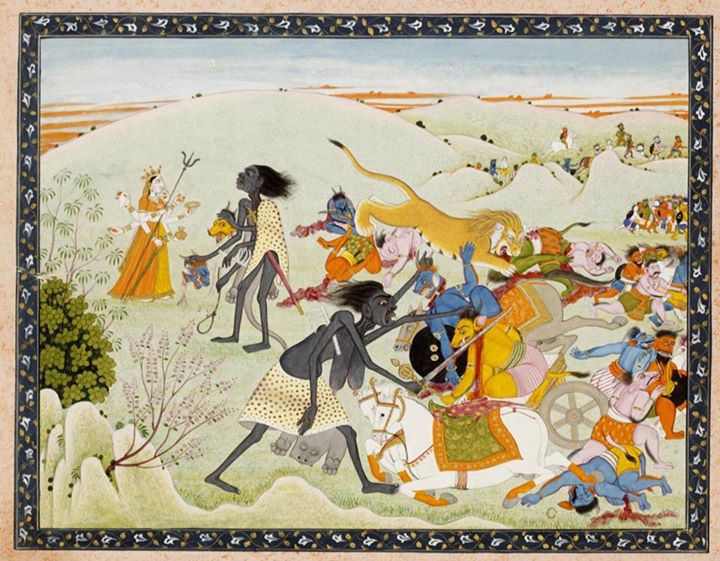 Painting, in opaque watercolour and gold on paper, Kali attacks in the battle scene from one of the ancient Puranas, the Markandeya (Devimahatmya), the story of the goddess Durga's battle and defeat of the buffalo-demon Mahisa. A long war takes place between the gods led by Indra and the antigods, riding a lion Durga goes to defeat the armies of the antigods. Kali attacks the demons Chanda and Munda, and presents their heads to Chandi (Durga). Album painting, representing the terrible Goddess Kali triumphant on the battlefield, Rajasthan, Kangra style, 18th century.

Pargiter died at Oxford on 18 February 1927 in his seventy-fifth year. In his Ancient Indian Historical Tradition, taking the accession of Chandragupta Maurya in 321 BC as his reference point, Pargiter dated the Battle of Kurukshetra to 950 BC assigning an average of 14.48 years for each king mentioned in the Puranic lists.

Oh this is wonderful! I love Kali's pendulous breasts and her wild, wild hair - what is that peeking out from between her legs, at center bottom? the head-end of her leopard skin?