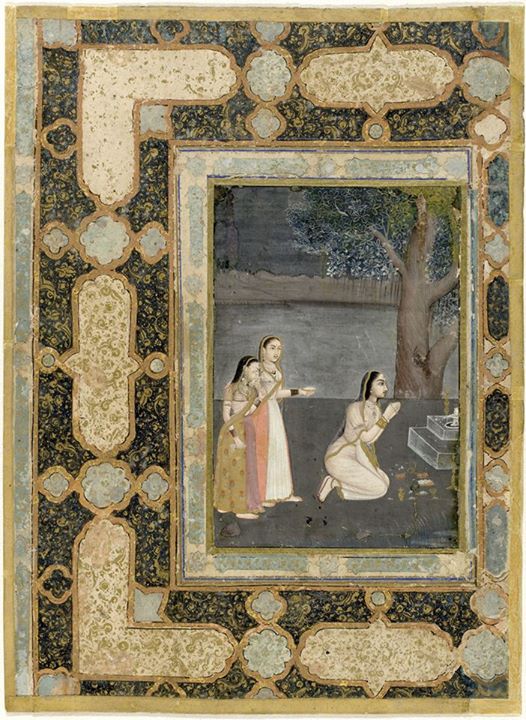 A lady prays in a Shiva shrine - 1770
Bhairavi Ragini
India

Ragamala Paintings are a series of illustrative paintings from medieval India based on Ragamala or the "Garland of Ragas", depicting various Indian musical modes called Ragas. They stand as a classical example of the amalgamation of art, poetry and classical music in medieval India.

Ragamala paintings were created in most schools of Indian painting, starting in the 16th and 17th centuries, and are today named accordingly as Pahari Ragamala, Rajasthan or Rajput Ragamala, Deccan Ragamala, and Mughal Ragamala.

In these painting each raga is personified by a color, mood, a verse describing a story of a hero and heroine (nayaka and nayika), it also elucidates the season and the time of day and night in which a particular raga is to be sung; and finally most paintings also demarcate the specific Hindu deities attached with the raga, like Bhairava or Bhairavi to Shiva, Sri to Devi etc. The paintings depict not just the Ragas, but also their wives, (raginis), their numerous sons (ragaputra) and daughters (ragaputri).

The six principal ragas present in the Ragamala are Bhairava, Dipika, Sri, Malkaunsa, Megha and Hindola and these are meant to be sung during the six seasons of the year â€“ summer, monsoon, autumn, early winter, winter and spring.

Sangeeta Ratnakara, is an important 12th century CE treatise on the classification of Indian Ragas, which for the first time mentions the presiding deity of each raga. From the 14th century onwards, they were described in short verses in Sanskrit, for Dhyana, 'contemplation', and later depicted in a series of paintings, called the Ragamala paintings. Some of the best available works of Ragamala are from the 16th and 17th centuries, when the form flourished under royal patronage, though by the 19th century, it gradually faded.

In 1570, Kshemakarna, a priest of Rewa in Central India, compiled a poetic text on the Ragamala in Sanskrit, which describes six principal Ragasâ€”Bhairava, Malakoshika, Hindola, Deepak, Shri, and Meghaâ€”each having five Raginis and eight Ragaputras, except Raga Shri, which has six Raginis and nine Ragaputras, thus making a Ragamala family of 86 members.

Most of the extant works of Ragamala are from Deccan style, where Ibrahim Adil Shah II of Bijapur, was himself also a fine painter and illustrator, though some Rajput style also exist of which the work of an artist of the 'Chawand' (a part of Mewar) school of painting, Sahibdin, whose Ragamala (musical modes) series dated 1628, are now in National Museum of India.