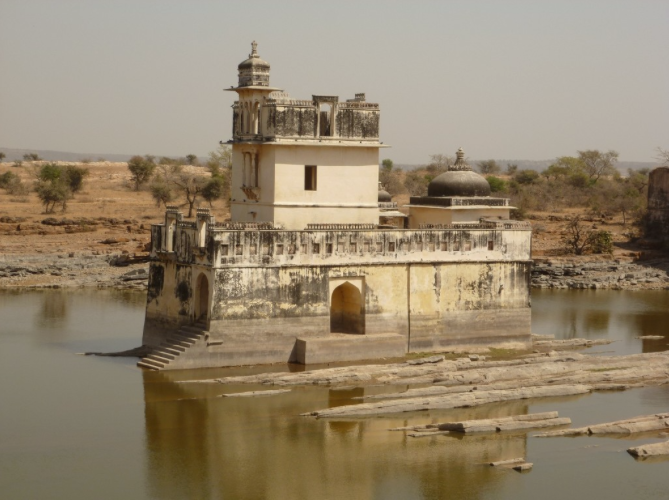 ..."One such famous story is that of the Rani Padmini, who burned herself alive along with the other ladies of the court in order to protect their honour from the invading Sultan Alauddin Khilji. In 1303, Sultan Alauddin Khilji of Delhi decided to attack Chittor to capture Padmini, besotted from hearing stories about her matchless beauty. When he was refused the meeting, he declared himself Padminiâ€™s brother and agreed to the Ranaâ€™s (Kingâ€™s) offer that he could enter the fort unarmed to look at Padminiâ€™s reflection. After glancing upon the Raniâ€™s reflection in a lotus pond, he had his host captured at the outer gate by his men. In order to rescue her husband, Rani Padmini sent a messenger to the Sultan that she would come to him. However, the palanquins that were supposed to carry the Rani and her ladies were filled with soldiers instead. There was significant bloodshed among the Rajput soldiers, but the Rana was rescued. Despite this, war and potential death was imminent, considering the Sultan was raring to attack with a vengeance. Therefore, Rani Padmini and her ladies committed Jauhar (self-immolation) so that the men could go fight their last battle.

The Rani and her beauty might have been lost, but her palace still stands, along with the ill-fated â€˜viewing roomâ€™ and the lotus pond. The guide will even point you to a cellar with black walls in the Rana Kumbha Palace and tell you that it is the room where the ladies burnt themselves alive." (Source: http://bit.ly/2jiADfq)

But this is what the Wikipedia says...

Alauddin Khilji's siege of Chittor in 1303 CE is a historical event. Although the legend of Padmini is the best known story about the siege, it has little historical basis. Amir Khusrau, who accompanied Alauddin on the Chittor expedition and described it in his Khaza'in ul-Futuh, makes no mention of any Padmavati or Padmini. In fact, according to Khusrau, Ratan Sen and his family were spared after the conquest of the fort. Other chroniclers, such as Barani and Isami, also state that Alauddin returned to Delhi after forgiving Ratan Sen and his family.[16] The so-called Padmini Palace at Chittor is a relatively modern structure.

When the British writer James Tod compiled the legends of Rajasthan in the 1820s, he presented Padmini as a historical figure, and Padmini came to be associated with the historical siege of Chittor. In the 19th century, during the Swadeshi movement, Padmini became a symbol of Indian patriotism. Indian nationalist writers portrayed her story as an example of a heroic sacrifice, and a number of plays featuring her were staged after 1905.Ireland-born Sister Nivedita (1866-1971) also visited Chittor and historicized Padmini. The Rajkahini by Abanindranath Tagore (1871-1951) popularized Padmini as a historical figure among schoolchildren. Later, even some history textbooks started mentioning that Alauddin Khilji invaded Chittor to obtain Padmini.

This is a 19th century replica of what Rani Padmini's Palace might have looked like. This was built by Maharaja Fateh Singh in the 1800s. Please don't post info without checking the facts first.

"Ram is a myth. There is no historical evidence that he existed." "Durga was a "sex worker" according to alternative history." "Padmini never existed because there is no written record of her before the Padmavat." Well, these arguments are getting silly by the day if not outright moronic. Hindus were never really people keen on recording their history, even our epics were transmitted orally till they were recorded in the form they exist in. So for a land ravaged by invaders there is not really a strong chance of finding precise historical records. Other important point that "historians" from the Romila school ignore either deliberately or because of their suspect scholarship is that Islamic court records deliberately underplayed Hindu elites and mentioned them sparingly only in an adversarial tone. Considering there is a strong cultural memory of genocides and Jauhars, only "historians" who pay homage to the existing establishment without examining the claims with the detail they deserve are likely to say that Maharani Padmini never existed, since they are more likely to give no credence to the cultural memory by rejecting it as a later interpolation or by impugning motives. Ultimately Maharani Padmini is a symbol of Rajput resistance and pride, who didn't want a fate which was a thousand times worse than what Yazidi girls have faced. To denigrate that symbol is to denigrate Rajput pride, their history and their culture. As for Allaudin Khilji, there is enough evidence in the writings of his court chroniclers that he was a genocidal maniac who lusted after other women and molested with impunity. If Bollywood was really interested in making a movie on Khilji which involved an idea of romance then ideally the leads should have been male though. Coz in spite of all the women that he kept in his harem, his favorite was his slave Malik Kafur. That way Bollywood dhimmis can stand for SJW rights and what not.

Another thing to calm people down a bit: no contemporary Sultanate or Rajput records speak of Rani Padmini, if I'm not mistaken. The earliest mention of the Queen appears in Malik Muhammad Jaysi's epic Padmavat, written in 1540 CE, almost 237 years after the 1303 Chittorgarh attack took place. It would be fair to keep in mind that the concept of ideal Queens and wives were necessary for maintaining a kingdom's integrity. As to whether Rani Padmini ever existed, we have no historical evidence. Whatever we know about her, come from Padmavat, and later Colonial narratives (such as Todd's Annals). The British colonizers realized that the figure of the "pure, sacrificing Rajput woman" would fit perfectly into their Victorian ideals and therefore made much propaganda out of Rani Padmini and Meera Bai. Historical evidence, however, remains scarce.

and there are no such historical facts that this happened. mentioned in Padmavat of Mailk Muh.Jayasi. In which Rawal Ratan Singh wanders for 20 years to find Padmavati. But most of people dont know that He ruled from 1302â€“03 CE. just 1 to 2 years

Indians never kept historical records, most of what we get is in the form of poetry... Something may be true but then peots must have weaved a lot of stories around that fact... But I agree even if something fiction sentiments of people must be cared for and unnecessary controversy should be avoided... On the other hand BJP and its followers have resorted to violence to get things done their way and Bollywood has either supported it or kept mum now they are getting the same treatment and they are crying foul... This has become why of sorting out problems in India lately...

I don't find any logic or reason behind digging out this pathetic incident. Whether or not it was true, but certainly an untimely argument on a baseless issue. History is nothing but a record of events and should be deeply analyzed in a scientific way rather than serving the purposes of folklores.

I do not know if Rani padmini is a mythological character, but will love to see proof of this epitome of bravery and beauty . For sure, Khilji was one of the most brutal n aristocrat ruler the world has ever seen, which bansali like secular imperialists potrays az a hero... Does the movie talk about his affairs with men? No. Does out ever suite him as rapists? Duh Well if it's freedom of speech, he should learn to keep his fantasies to himself. And the worst part, some centuries n millenias later, our younger generations would take these films as a proof, just like we seek proof from Wikipedia,and proclaim that Khilji was an eminent ruler who took India to glory. Applause for people like Bhansali for rewriting history and morons who watch n make this movie yet another crorevlub movie..

Liberty to the arts. The Satanic Verses anyone? Aandhi anyone? Midnight Express anyone? Nine Hours of Rama anyone?

Palace of Rana Bhim and - P A D M I N I Annals and Antiquity of Rajputana by Col.James Tod

Why is it kept in such dilapidated condition ?

The famous historian Mr. . irfan habib also said it's a myth. Not true

Why can't BHANSALI read it

Bhansali is His Masters Voice.These people. Are stooges

And they say that Aryans came from Europe.

Jayanti Jha Next on our itinerary ðŸ˜‚