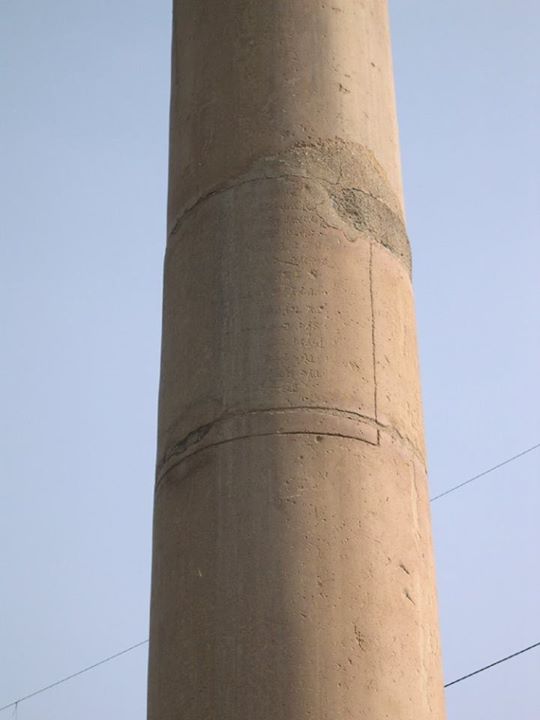 Digital Rare Book:
State and Government In Ancient India
From earliest time to circa 1200 A.D.
By A.S.Alteskar
Published by Motilal Banarsidass - 1949

The pillar was originally erected at Meerut in the 3rd century BCE and removed to Delhi in the mid-fourteenth century by FÄ«rÅ«z ShÄh Tughluq who incorporated it into a royal palace. The pillar was thrown down and broken into pieces in the reign of the late Mughal king Farrukhsiyar (CE 1713-19) by an explosion of a power magazine in the palace. Those inscribed portions that survived were subsequently sawn into sections and sent to the Asiatic Society, Calcutta. Some were retrieved in 1867 by order of the British Government and an attempt made to reassemble the pillar on the Ridge at Delhi. The British Museum fragment appears to have left India before 1867; it was held in the India Museum, London, until 1880 when the collections were transferred.

Text and image credit:
Â© Trustees of the British Museum

The inscription on the 3rd century pillar describe King Devanampiya Piyadasi's policies and appeal to the people and future generations of the kingdom in matters of dharma (just, virtuous life), moral precepts and freedoms. Some extracts of the translation, per James Prinsep, are as follows: Among high roads, I have caused fig trees to be planted that they may be for shade to animals and men... â€” -Inscription on Ashoka Pillar ...And let these and others the most skillful in the sacred offices discreetly and respectfully use their most persuasive efforts, acting on the heart and eyes of the children, for the purposes of imparting enthusiasm and instruction in dharma (religion). â€” -Inscription on Ashoka Pillar And whatsoever benevolent acts have been done by me, the same shall be prescribed as duties to the people who follow after me, and in this manner shall their influence and increase be manifest - by service to father and mother, by service to spiritual pastors, by respectful demeanor to the aged and full of years, by kindness to learned, to the orphan and destitute and servants and minstrel tribe. â€” -Inscription on Ashoka Pillar Ttanslatrd by James Prinsep

Nice thanks. really love it