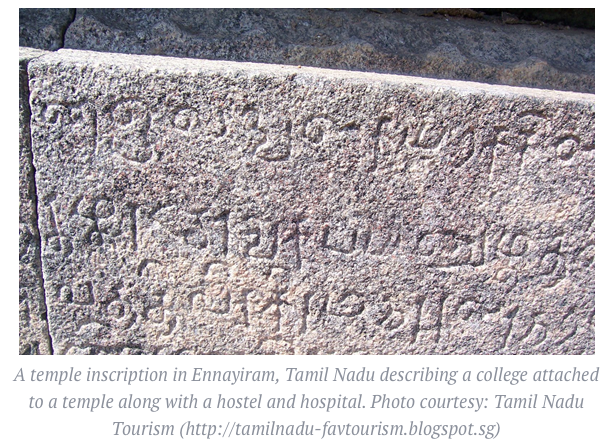 We continue our series on the universities of ancient India, which imparted a multi-disciplinary education to students of advanced learning. In this second part, we look at Indiaâ€™s temple universities, graduation ceremony, funding of scholars and the saga of transmission of knowledge outside the frontiers of mainland India.

A student who completed basic education in ancient India and wished to learn more, had a plethora of institutions to choose from, depending on whether he wanted to specialise in the Vedas, logic, medicine, sciences, classical music or any other subject. Thus, a student who wanted to learn classical music could, for instance, move to Varanasi and learn from the maestros in the cityâ€™s ancient college of music. If he found a friend keen on studying in Varanasiâ€™s college of astronomy, then perhaps the two could travel together. Travelling was a risky proposition in those days when the land was covered with forests abounding in predators, and parents would celebrate when their children returned home after four to 12 years of higher education.

In the Kathasaritsagara, there is a reference to a Brahmin, who decided not to send his son for further studies to Nalanda or Varanasi, which were closer to his place of residence in the Ganga plains and instead took the risk of choosing a far-off Valabhi university located in todayâ€™s Gujarat (Bose, 1990). Valabhiâ€™s graduates were known to secure employment in government services. Its courses in political science (niti) and business (varta) were well known alongside religious studies of Hinayana Buddhism (Apte).

An interesting reference to co-education is found in the Sanskrit play Malatimadhava written by Bhavabhuti (in the eighth century) where a female student Kamandaki is indicated to be a classmate and close friend of male students Bhurivasu and Devarata at a famous university in Padmavati. All three characters hail from different regions. (Mirashi, 1996)

There seems to have been a remarkable mobility of students and teachers across the universities of ancient India. Thus, we find professors in Nalanda, such as Sthiramati and Gunamati who had earlier established Valabhi University in the west. Dinnaga and Dharmapala, two famous scholars of Nalanda were both natives of Kanchipuram in the south. Ratnavajra, a noted professor at Vikramshila hailed from Kasmira (Kashmir). Xuanzang himself, after finishing his studies in Nalanda went to teach in Orissa upon receiving a directive from King Harsha (Mookerjee, 1960). The famous Bhaskara II, hailed by some as the greatest mathematician ever, taught at Ujjaini, but hailed from Bijapur in the south (Puttaswamy, 2012). Clearly, many of the learned people of yore travelled to centres of excellence in their areas of interest.

An interesting aspect about the education system was that it was subsidised for pupils and teachers by the ruling kings as well as communities that lived around universities. The Nalanda University was described by Xuanzang as having been endowed with buildings and lands by ruling kings of the time. He also mentions that the revenues of 100 villages were allocated for meeting the expenses of the university. The students and teachers received clothes, food, bedding and medicine free of cost. (Mookerjee, 1960)

However, according to the Jatakas, students who wished to study at Takshshila were required to either pay their tuition fees at the beginning or if they lacked cash, to pay in the form of services to the teacher, such as bringing firewood. Most Brahmin students were too poor to pay upfront and would opt to carry out menial tasks. Some would get permission to pay at the end of their studies, and there were instances of Brahmin students soliciting financial assistance from households. We also hear of some winning state scholarships and not being required to pay any fees. Often, families living around the universities would generously host meals at their residences for the students. (Mookerjee, 1960)

There was a well-established ecosystem to support learning. Since the ethos of the times demanded that Brahmin scholars lead a simple life engaged in the pursuit of knowledge without amassing riches, it fell upon the shoulders of wealthy non-Brahmin families as well as humble farmers to support those who were devoting their entire lives to learning and teaching (Hazra, 1987).

Discussion, debate, dissemination, disagreement & discourse were the hallmark of wisdom! What greatness!

The first meaningful step towards a reconstruction will not be and cannot be taken unless and until we end our craving for approval from the West and decide to act by our ideas/judgement for the furtherance of our national interests. Jai Hind!

Thanks pl. Somewhere in this journey of Indian Civilization somebody cut our roots & we forgot to realize the values, ethos, art, architecture, education, spiritualism,& wisdom of centuries!

Much of the learning went to the Far East and S E Asia, in India it got lost in the wall of defensiveness created by the successive invasions by outsiders . It also got distorted and in some ways obscure.'Protectionist ' practices cam into being! It also went out to the west through the Arab world and got wrongly ascribed to the Arabian countries.

When Vikramshila university was looted and destroyed by Muslim invaders at the same time in 12th century Oxford university was established in Britain..

But these longer historic associations of a civilization don't die but continue for longer periods as heuristics. Even now India puts a lots of emphasis on higher education then mere literate society. Our nation still celebrates research and knowledge. No doubt one of the best rated presidents is Dr Kalam. Even our services industry and generic drugs are partly because of this affiliation

Meaningful reconstruction of real education system destroyed for small greedy gains. I believe we can regain it if we bring the status of our primary education units at par present day UNIV in terms of facility n manpower.

It appears that civilizations,from time to time , commit suicide by closing themselves to innovation, entrepreneurship and the outside world . It is not clear why advanced civilizations sometimes chose deliberately to go backwards. Cultural openness to ideas and risk taking is always mantra of progress.

Our country was definitely one of the most advanced countries in the world. This study of educational freedom and ancient universities, thoughtfully encouraged by the erstwhile rulers is only a pointer to that fact. What a great tradition and culture we had!

Was higher learning open to the Shudras as well and were the courses taught linked to material culture in medicine, engineering, etc.?

We are neither taught nor made aware of our rich heritage .Let it begin from school level. Then as one grows he or she can make the choice to pursue what is best suited to his or her liking. The Kailashnath temple at Ellora, the temples of Angkorwat in Southeast ∈ the South India are marvels in engineering, architecture, art, deep thought, planning, perseverance, dedication & devotion. Various dance postures depicted on the coloumns& walles of temples have been reevolved into various dance forms . So let the imagination fly & choose its own calling.

It's a time when there was no descrimination in the name of caste, sex, creed, religion or region. Every body can study and learn. The Rulers were generously supporting the Education Institutions. A great time and tradition that had been conveniently destroyed after the invasions and after Independence by the Congress.

Interesting article - if one has read the old stories of Jataka Tales - Dasakumara Charitra - besides Ramayanaband Mahabharata - there are plenty of references to such incidences of characters going from place to place seeking knowledge - quite a few of them are entwined with the adventures of the characters enroute. Can one believe even courtesan had to perfect her profession enabling her to be a respected member of society. Probably this was the only country where there was no inhibition to study a subject for sake of knowledge. If looked closely this existed even as late as the 12th -13 th century and thereafter a decline due to outside influence declining under British and finally given an decent burial by the Congress and Nehrus in the name of modern education. To revive our old culture to the extent of being relevant today, education should be looked at from student teacher ratios and relationship - where respect for the teacher is made implicit and love for the students a teachers conscience. This seems lacking as Most do it as a matter of a job not a commitment to society.

Excellent job. More of such work is needed. Hope to see new insight and some logical evidence of mechanical engineering marvels in ancient India. Have they survived turmoil of time?

According to me, we have not lost all.All we need to engage in studies of epigraphy and also try to bring back old manuscripts written in palm leaf.We should not waste to the past happenings and present disorders.We must try to study them and deliver a little for the future and keep up our great ancient tradition.

Yes you are very correct, once I had a chance of going thro a book written in English by one Bengali gentleman, in which I found Ennayiram university which was equivallant to Nallanda of big scale. Here 800 Vedic scholars only allowed with boarding lodging etc I have visited this village on route to Vandavasi near thindivannam TN,there are Brahmadesam Ennaiyram etc, there is a ruined Narashima temple and this university much of public were not aware of this. I my self is a descendant of 8000ers a subsection of TN Iyers,in that group notable Tamil scholar MahaMaha upadya U.Vee.Swaminathaiyer, Dr.MS Swaminathan Indian Agriculture scientist, Late G.Ramachandran IAS, Psec to Indira. Moorarjee bhai , Anna etc Cine fame director K Balachandar,actress Lakshmi, Etc hails. This notifications I have made in FB 2 or 3 times. You can also visit, web Brahmins of 8000ers or Ennayiram.

Tamil and his culture is older and great culture in india...

this inscription doesnt say its india but in old dravidan language

That heritage is being questioned now by some misguided elements

Greatness of Akanda Bharath destroyed by Arabs and European.. stole from every aspect of our ancestors.. due to jealousy

Where are the old threads for the carpet that is to be woven?

True. But the Dalits, women , Adivasis and non Savarnas did not have access to these traditional centres of learning